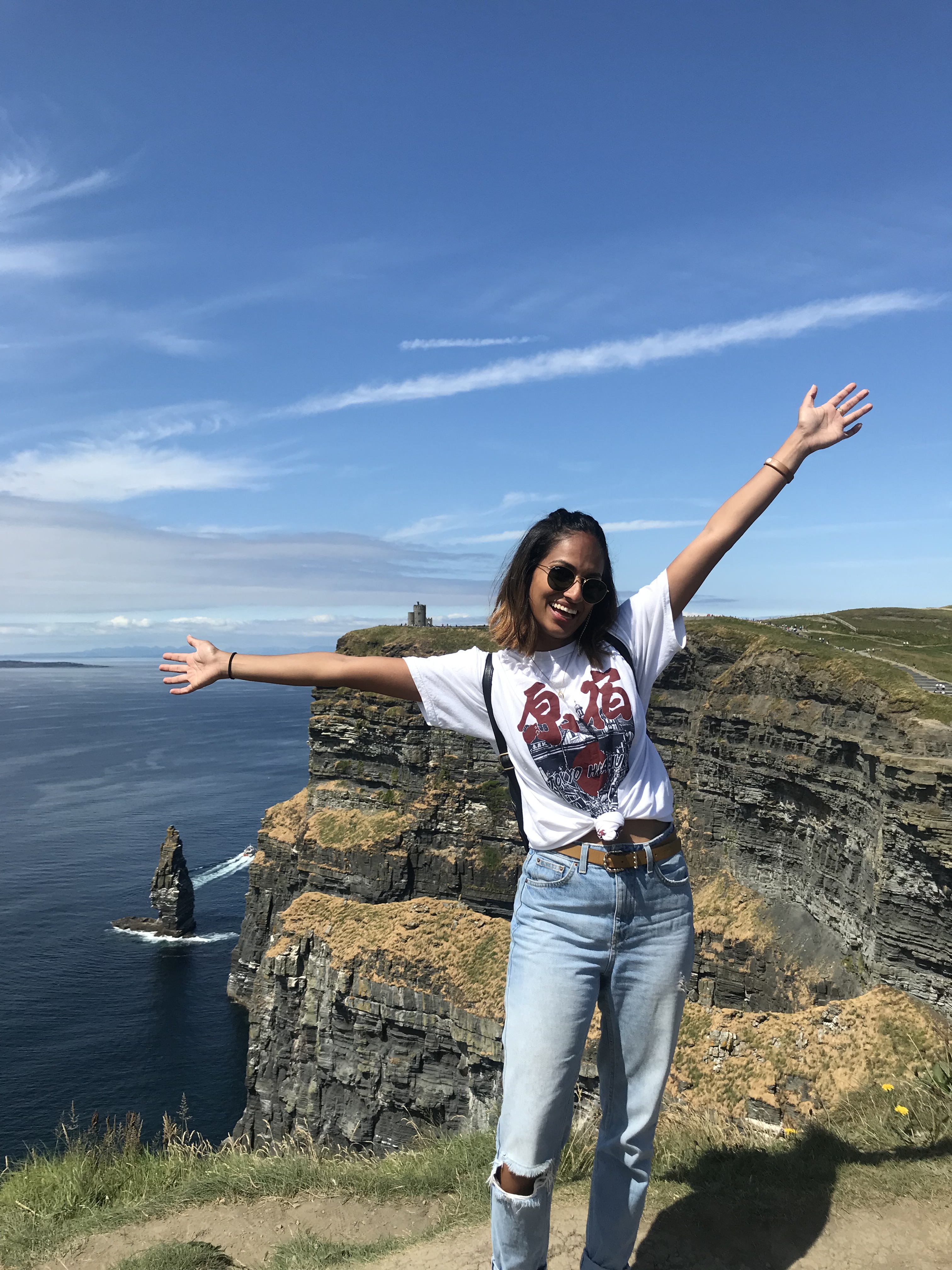 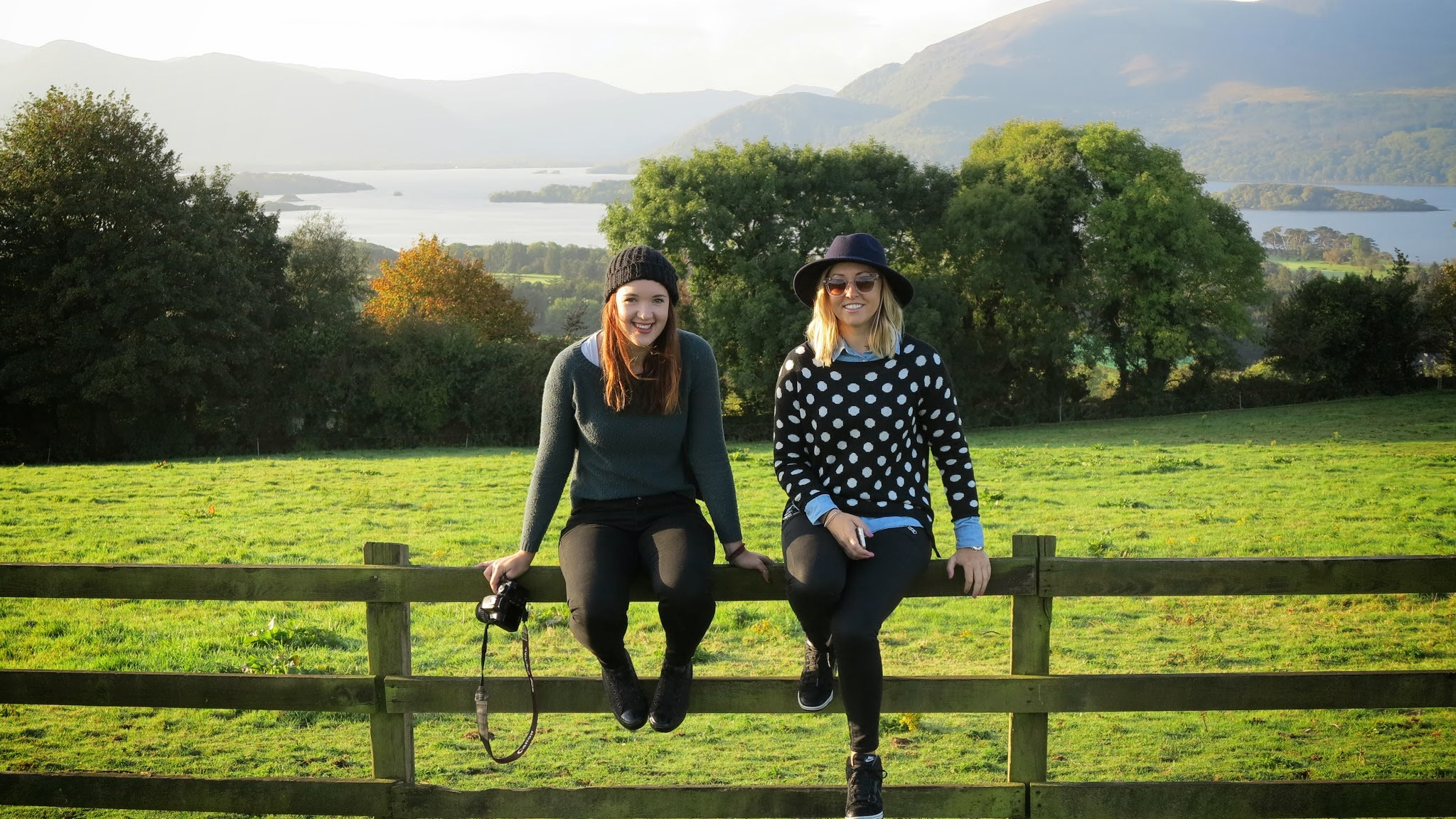 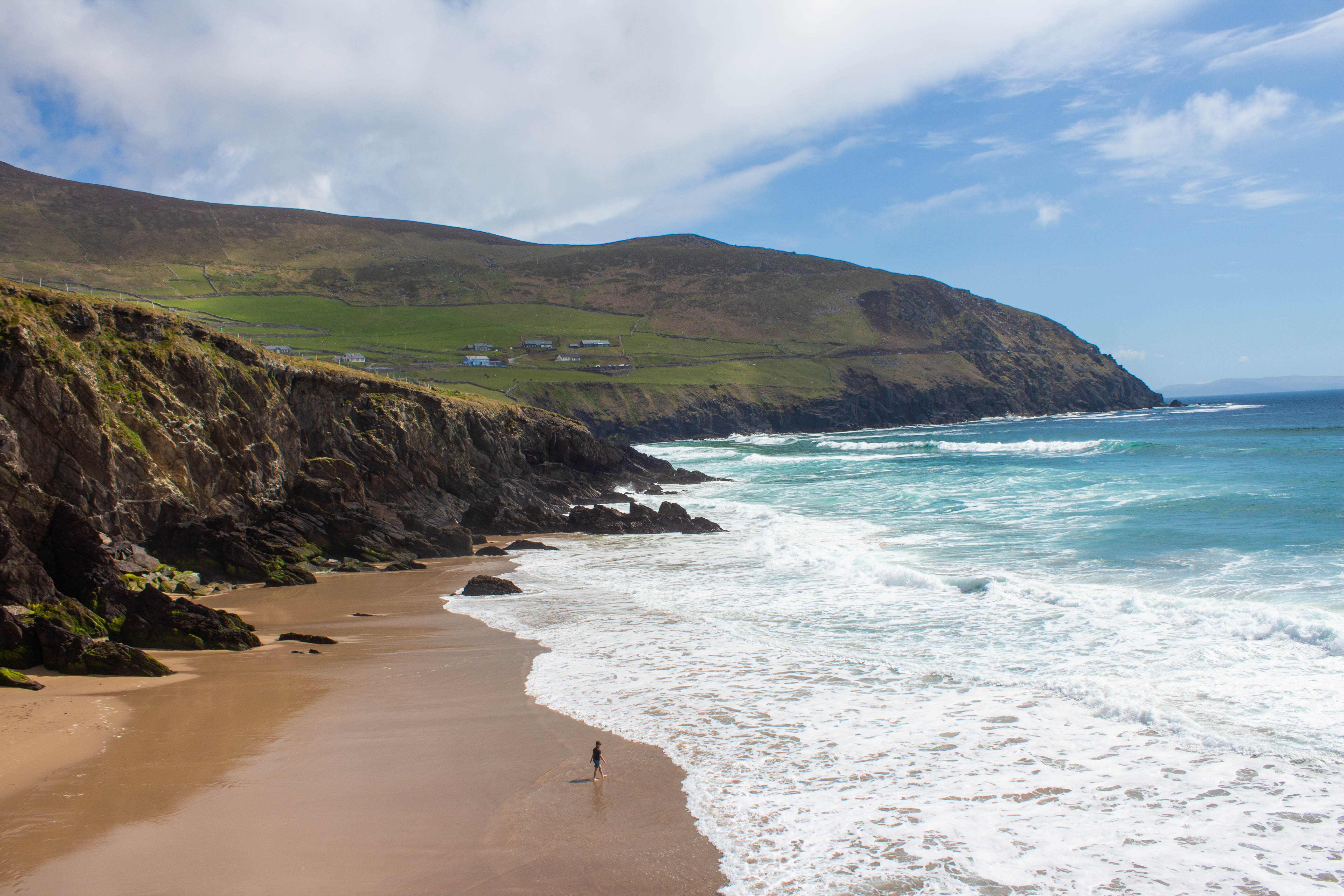 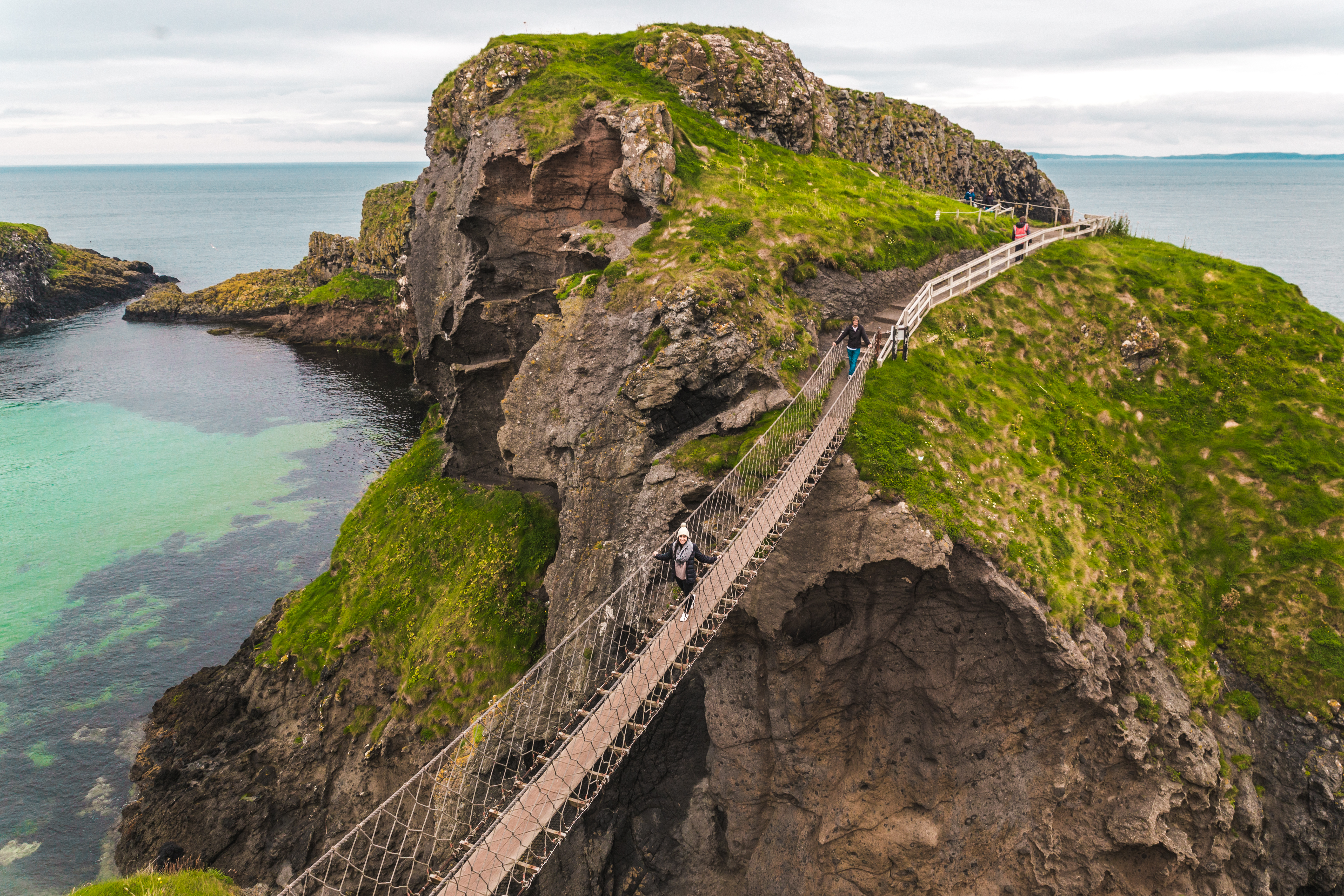 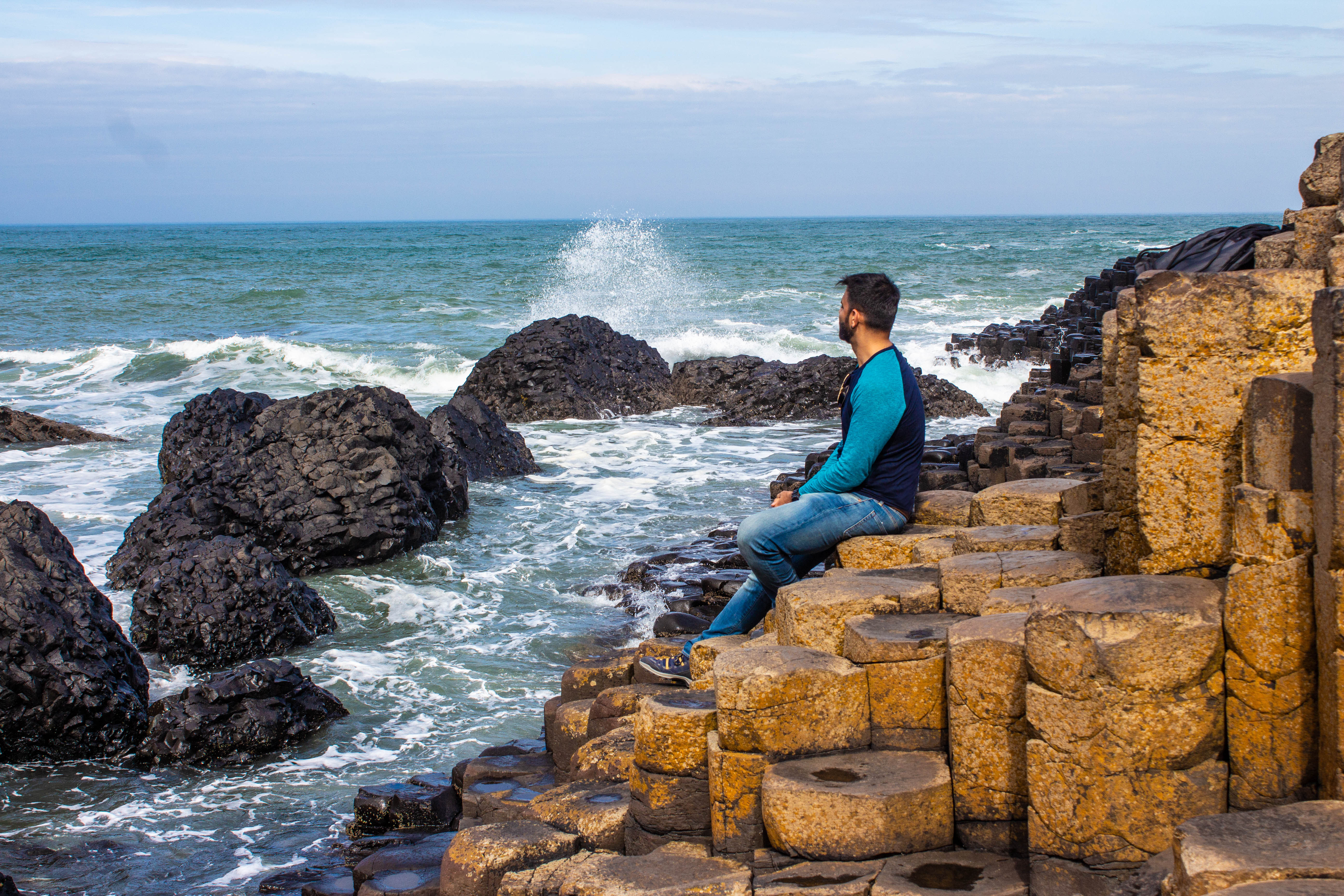 Tour Ireland, north and south and visit Inis Mór, the Gaelic-speaking Aran Islands hidden away off the west coast.

Our ultimate Irish adventure! Tour Ireland, north and south and visit Inis Mór, the Gaelic-speaking Aran Islands hidden away off the west coast. This one has it all — traditional music, stunning scenery, ancient monuments and vibrant towns, plus great craic on the road and at night. This is your chance to see Ireland through Irish eyes. Seven action-packed and fun-filled days which may well turn out to be the best days of your life!

We start from the Fair City of Dublin at 8.30am and leave the Republic behind when we head north to Belfast, the capital of Northern Ireland. Take the chance to do a famous Black Cab Tour with a local cabbie at the wheel and explore the Loyalist and Republican heartlands with their famous political murals. Alternatively, you have free time to see the city or visit Belfast’s Titanic Experience to learn about the iconic, yet doomed ship. In the afternoon we head even further north to 'Dark Hedges' that starred as the Kingsroad on the HBO hit series Game of Thrones. We spend the night in the rural village of Ballintoy, which will also be familiar to the Game of Thrones fans as Lordsport on the Isle of Pyke. You will have the chance to head to the stunning Carrick-a-Rede Rope Bridge and sway Indiana Jones' style over the choppy Atlantic Ocean, before admiring the stunning sunset.

What a way to start the day! We follow in the footsteps of Giants on the eighth natural wonder of the world and UNESCO World Heritage Site, The Giant's Causeway. With its thousands of hexagonal columns, you can make up your mind what caused it; a giant or geology? After hearing tales about the giant Finn MacCool, we travel further along the beautiful coast to Derry, our home for the night. This medieval city will test your emotions as you are brought face to face with its troubled history, both past and present on an optional award-winning walking tour led by a local guide. - Breakfast included

Heading south, we cross the border and make our way back to the Republic of Ireland. We visit the resting place of the world-famous poet, W.B. Yeats, before stopping for lunch at the quaint town of Westport on the edge of an Atlantic inlet. The wild and rugged Connemara awaits, with its barren mountains in the north and bogs and lakes in the south, which both have been inspiring Irish musicians for centuries. Our overnight is the cultural capital of Ireland. Enjoy Galway’s lively atmosphere and streets filled with buskers or re-enact Ed Sheeran’s Galway Girl music video in the vibrant Latin Quarter. - Breakfast included

Travel back in time as we cross the Atlantic to Inis Mór, the largest of the Aran Islands. With its 3,000 miles of stone walls, Inis Mór is like nothing you have ever seen. Explore the island on foot, hire a horse and cart or rent a bike. Whatever you do, don’t miss the awe-inspiring Dun Aonghasa, a 3,000-year-old Iron Age ring fort perched on the edge of a 300-foot high cliff. The locals are fluent Irish Gaelic speakers and super friendly, so get chatting to them over a pint to get an insight to the Irish island life. After a tremendous day exploring the remote island, it’s time to head back to the mainland for a pint of Guinness or two in one of Galway’s many buzzing pubs. - Breakfast included

We continue our journey through County Clare and the Burren region, Ireland’s lunar landscape and home to ancient tombs, fairies and leprechauns. We stop for lunch in Ireland’s surf capital Lahinch on the west coast before making our way to the most famous cliffs in the world! Hold on to your hats because next up are the awesome Cliffs of Moher, rising hundreds of feet over the Atlantic Ocean. The cliffs are famous the world over for their stunning views and have been used as a backdrop in movies like Harry Potter & the Half Blood Prince and The Princess Bride. We have included the entrance to the award-winning Visitor Centre in our trip, so after a wander on the cliff's edge you can head in and learn the history of this magnificent place. We spend the night in Ennis, County Clare; the renowned home of Irish music. The pubs are filled with locals playing 'trad' music, so pick your seat and join a proper Irish jam session. - Breakfast included

Today is all about breathtaking scenery and adventure. We travel the stunning Slea Head Drive on the Dingle Peninsula and spend the day exploring the dramatic Irish coastline. Your Guide will take you to the edge of the ancient world and tell tales of our ancient heroes and warriors. Spot 'The Sleeping Giant' and 'The Three Sisters' amongst the rugged coastline and beautiful beaches and learn how to play hurling, originating from an ancient Gaelic game, or just relax and take in the stunning views. We head to the party town of Killarney for the night, located on the shores of Lough Leane. You can take a horse and carriage ride through the beautiful Killarney National Park and see Ross Castle that was built in the 15th century, before joining the locals in a Kerry ‘Dishco’ and dancing the night away. - Breakfast included

It’s time to leave the Kingdom of Kerry behind as we go on to Blarney Castle in the rebel county of Cork. The famous castle dates back to 1446 and was built by the MacCarthy of Muskerry dynasty. On the top of the castle lies the Stone of Eloquence, better known as the Blarney Stone. If you dare to hang upside down at 11 meters and give the stone a big juicy smacker, you will be gifted with the legendary ‘gift of the gab’. You will never be lost for words again! In the afternoon we stop at the imposing Rock of Cashel, once the seat of the Kings of Munster before heading back to the Fair City of Dublin. It’s time to say goodbye to your new friends when we arrive back to the capital at approximately 5.30pm. - Breakfast included

Award winning Busabout offers a unique way to travel where you can enjoy the flexibility to go as you please around Europe, but with all of the expertise of a tour guide as you go from place to place. They started in 1998 when they first linked up the best cities and destinations in Europe with a commitment to the independent traveller to make their time, cash and experiences go further. By being the alternative choice they have remained dedicated to their freestyle form of travel and their unique hop-on hop-off flexible coach network.

And if you’re travelling solo, it’s so easy to meet like minded independent travellers and you’ll soon have heaps of new friends on the road. Also with Busabout’s Trip Mates and Community you can even get in touch before you start, so heaps more fun than travelling on trains and buses by yourself.

They live to travel and as travellers themselves they know what makes an unforgettable trip. Sometimes they show you around, other times you are free to explore, either way, they hope to give you choice and plenty of local knowledge. This passion to explore the world (without costing the Earth) has also developed over the years into their innovative Adventures, be it island hopping in Greece and Croatia, trekking through Eastern Europe, exploring a sea cave on the island of Capri, Italy, or discovering the ancient cultures of Egypt and Morocco.

Although they do attract the 18-35 age range, they have no upper age limits on their tours, so be as young as you feel and join them on a travel experience of a lifetime!

This tour is operated by Busabout

Compare tour This tour has been added to the comparison list. Cick here to view.
Enquire No Upper Age Limits on all Tours!