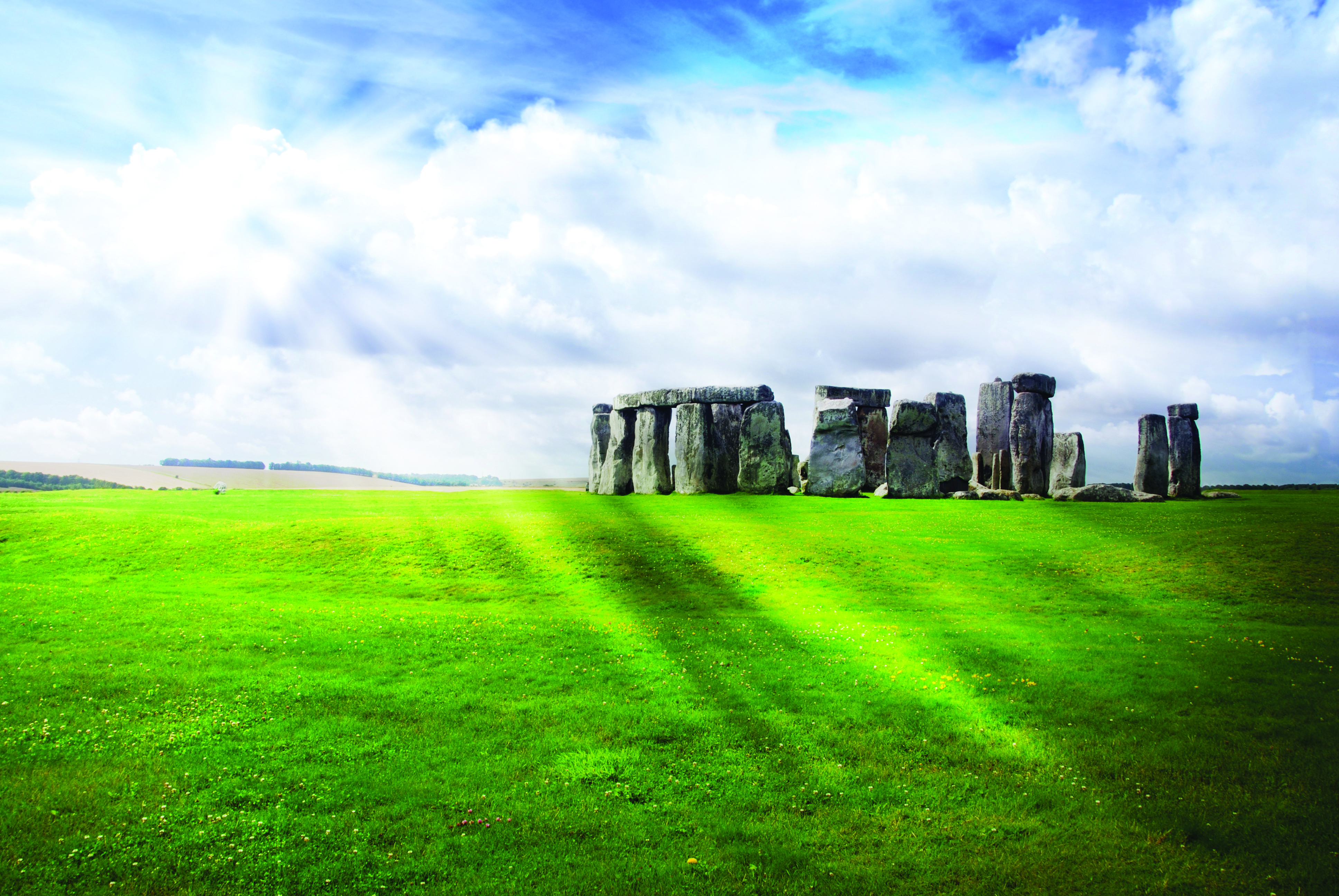 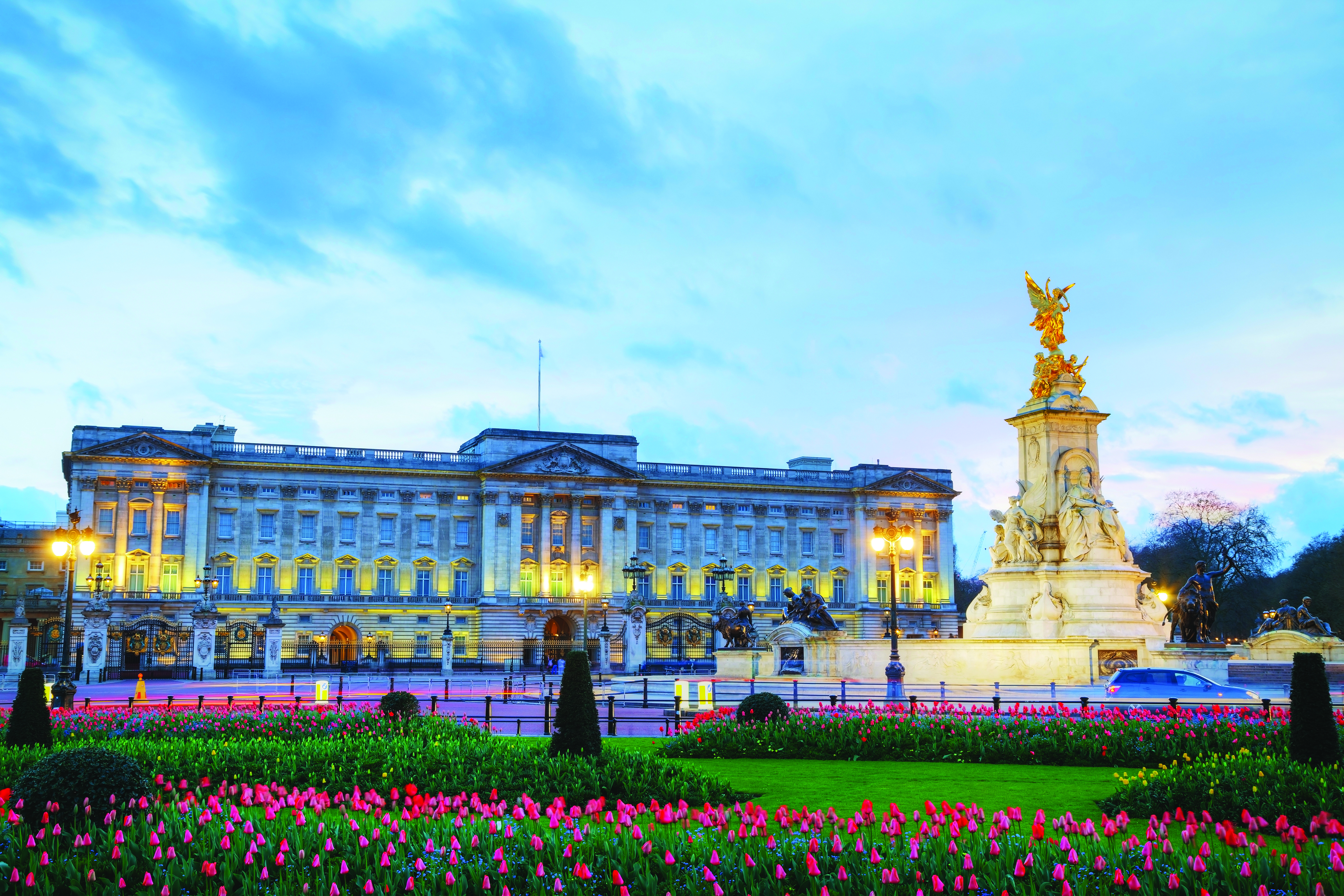 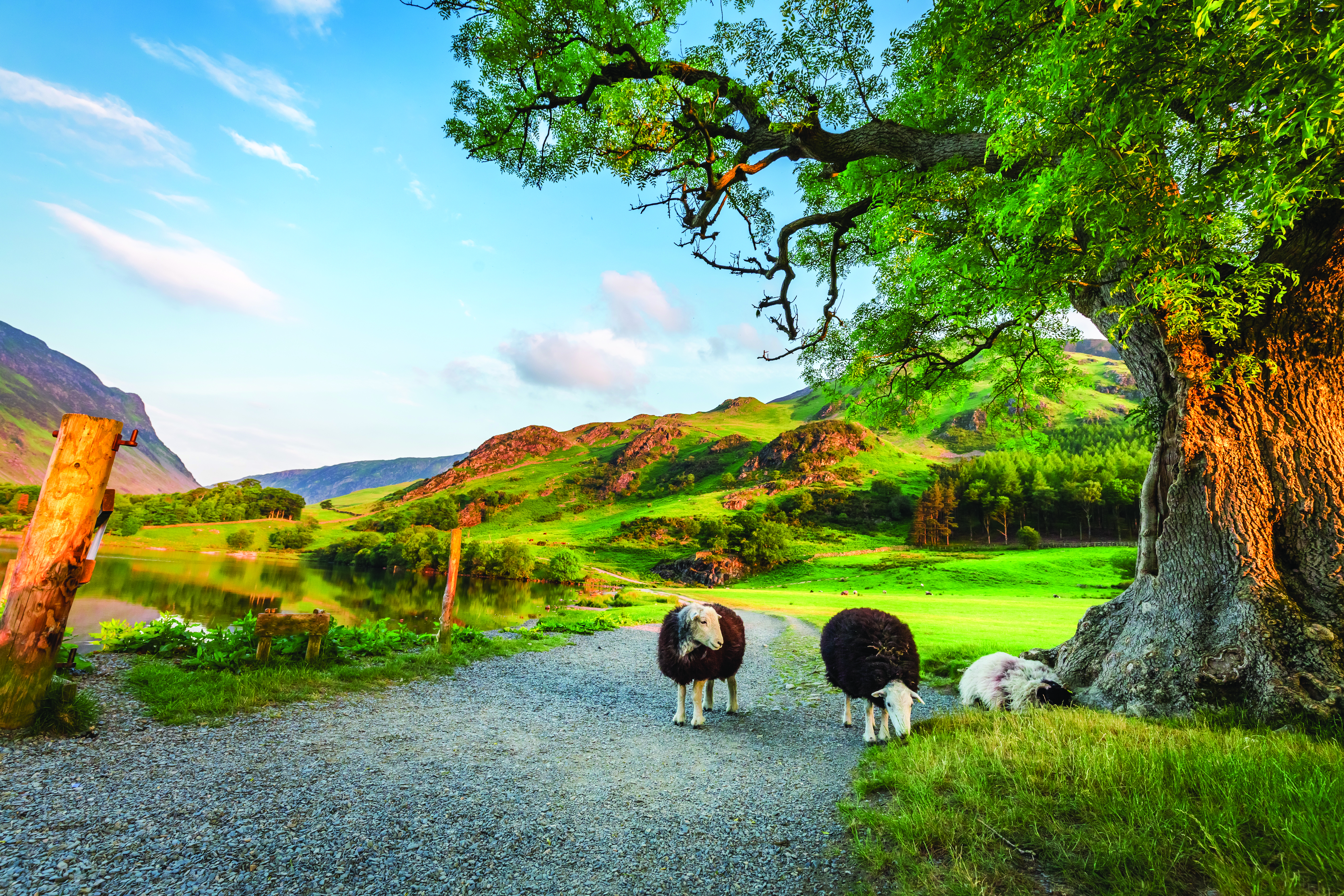 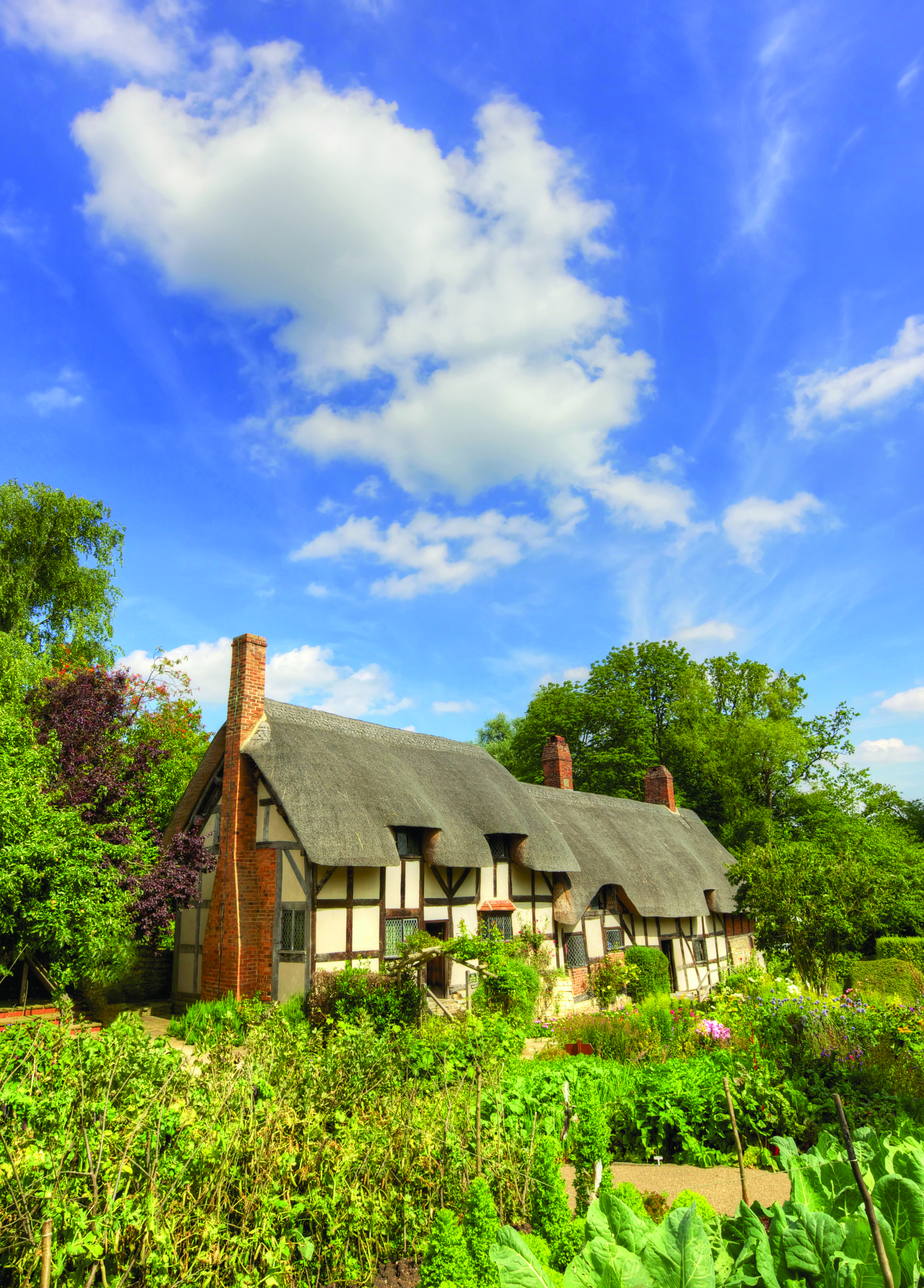 Sleepy villages where sheep wander the grassy hillsides, lakes set amidst mountains that inspired centuries of literature, and cities thriving with arts and culture – these are the landscapes of Britain. Discover them on this memorable journey through England, Scotland and Wales. Sleep in a historic castle. Enjoy medieval York and its historic Minster. Soak up the pastoral landscapes of the Cotswolds. Walk in the footsteps of William Shakespeare and enjoy dinner at Hall’s Croft, a 400-year-old Shakespearean family home. Explore London and Edinburgh. Personalize your tour with a choice of included excursions in Stratford and Edinburgh. Experience the wonder of Stonehenge.

Edinburgh: A Scottish Night Out

Join us for a rollicking evening of tastes, sights and sounds that are classically Scottish. Feast on a banquet prepared from a selection of local recipes. Your taste buds will savor the true flavor and goodness of this distinctive country. Tonight will be filled with entertainment including Highland pipers and dancers, who deliver the very best in Scottish music, song and dance. A highlight of the evening is the Ceremony of the Haggis, and, of course, you may try this national dish. Be prepared for a Scottish night of food, fun and many fond memories! Duration approximately 3 hour(s). Transportation is included. A minimum of 15 passenger(s) is required to operate this option. This option will not be offered on packages that include the Royal Edinburgh Military Tattoo.


York: The Flavors of Yorkshire

Surround yourself in an old-world ambiance and the fresh flavors of Yorkshire when dining in a family owned alehouse located in the center of historic York. Begin by being treated to a tasting of five Yorkshire brews that includes a selection of ciders, lagers and ales. Then, pick your favorite to enjoy with your homemade farm-to-table dinner. You’ll delight in the personal service as you are guided through the menu featuring a variety of seasonal local dishes including the region’s famous “Yorkshire pudding.” Take this opportunity to get to know Northern England’s budding farm-to-table movement showcased during this locally inspired dining experience. Duration approximately 3 hour(s). Transportation is not included A minimum of 8 passenger(s) is required to operate this option. We will walk to the restaurant which is located nearby your hotel.

Your tour opens in London, the cosmopolitan and historic capital of England. This evening, join your fellow travelers for an ale and pie tasting at a traditional English pub.

London’s quintessential sights await you this morning. Alongside a local guide, view the Tower of London, Big Ben, the Houses of Parliament, Westminster Abbey and Buckingham Palace. This afternoon, enjoy some time at leisure to explore this iconic city on your own.

It’s time to say farewell to London and travel to the medieval city of York, stopping in the 800-year-old university town of Cambridge along the way. Upon arriving in York, join your Tour Manager for a brief orientation tour. Or, choose to arrive in York earlier by way of an optional high speed rail; climb aboard at London’s King’s Cross and sit back and relax as you travel 125mph through England’s stunning countryside; arriving in York just over two hours later, meet up with a local expert at York Station and embark on a walking tour of this remarkable city where you’ll see its famous Minster and walk the labyrinth of quaint narrow streets that still appear as they did in the Middle Ages. Tonight, stay within the city’s historic walls.

Enjoy a leisurely morning in York before traveling north through the rolling fields to bonnie (“lovely” in Scottish) Scotland. Stretching across the country you will find Hadrian’s Wall, once the mark of the northern border of the Roman Empire. Stop to see this ancient fortification that was begun in A.D. 122 to protect Roman Britain from the tribes of Scotland. Next, drive through Scotland’s Borders region before arriving in Edinburgh, the "Athens of the North." Discover Scotland's exciting capital, and one of Europe’s most beautiful cities, alive with history and culture. Tonight, enjoy dinner at a local restaurant.

Today it’s your choice! Get acquainted with this regal city on a locally guided all-encompassing tour of the city via coach -OR- join a local expert and explore the city on foot. Both tours include visits to Edinburgh Castle, home to the Scottish Crown Jewels, and the Palace of Holyroodhouse,* the Queen’s official residence in Edinburgh and the former home of Mary, Queen of Scots. The rest of today is yours to explore the city independently.

Our final stop in Scotland comes at the border town of Gretna Green, where generations of runaway couples came to get married. Later, return to England and travel through the picturesque Lake District. Here in the district’s heart, visit the charming village of Grasmere, home of the poet William Wordsworth. End your day with an overnight stay in beautiful Ruthin Castle, situated in the north of Wales.

Step back in time to the birthplace of the bard, William Shakespeare, on a journey to Stratford-upon-Avon – your home for the next two nights. Then, it’s your choice! Tour Anne Hathaway's thatch-roofed cottage, the childhood home of the author's wife -OR- choose to enjoy a leisurely cruise along the picturesque Avon River.

Complete your visit to Britain with a journey to mystical Stonehenge – an incredible entrée to some of England’s most gorgeous countryside. Explore the arrestingly beautiful villages of the Cotswolds region. Tonight, join your fellow travelers for a private farewell dinner at Hall’s Croft, a 400-year-old Shakespeare family home. Toast the end of a wonderful journey while actors in traditional costume perform some of Shakespeare’s most renowned scenes.

Your journey through Britain concludes today. 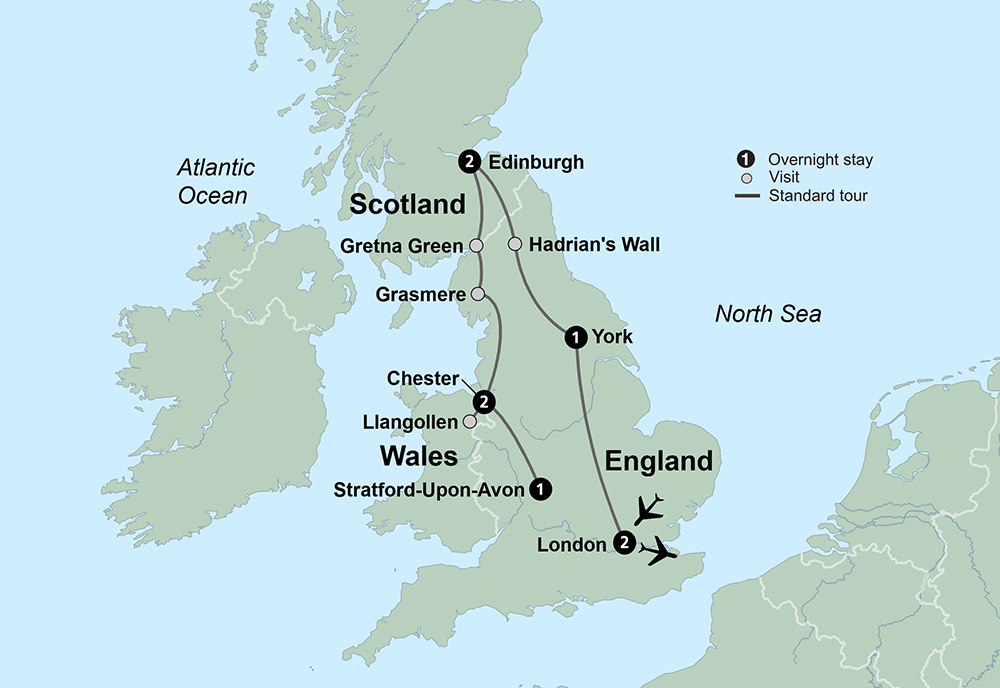 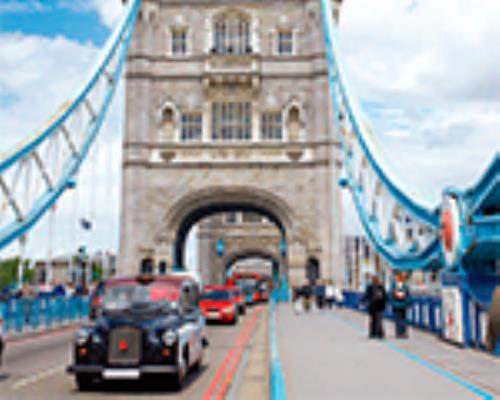 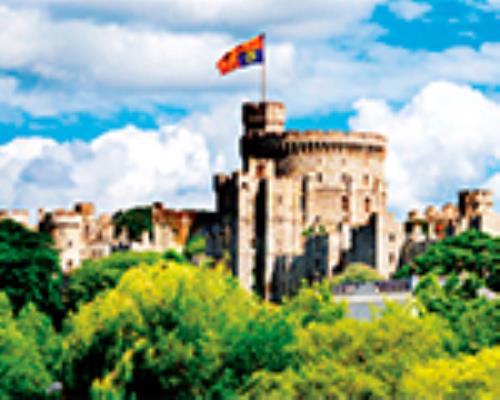 Best of Britain 9 Nights from pp 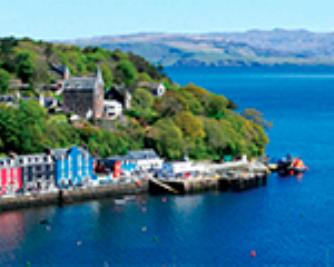 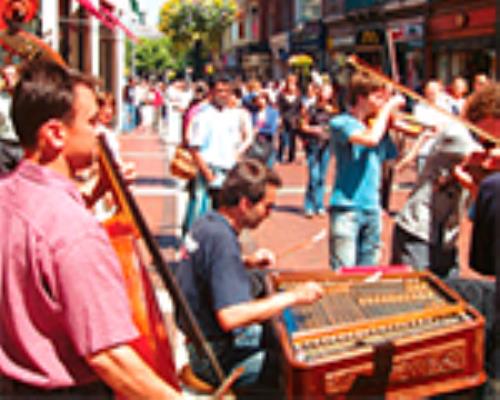 Gems of Britain 4 Nights from pp 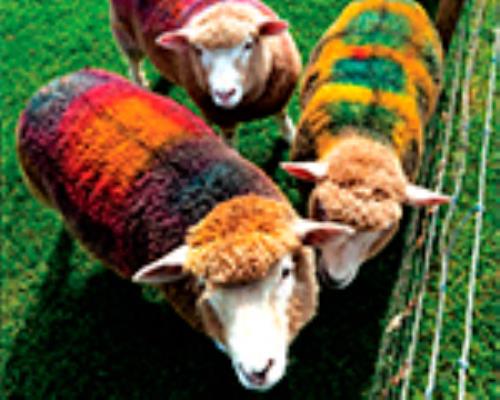