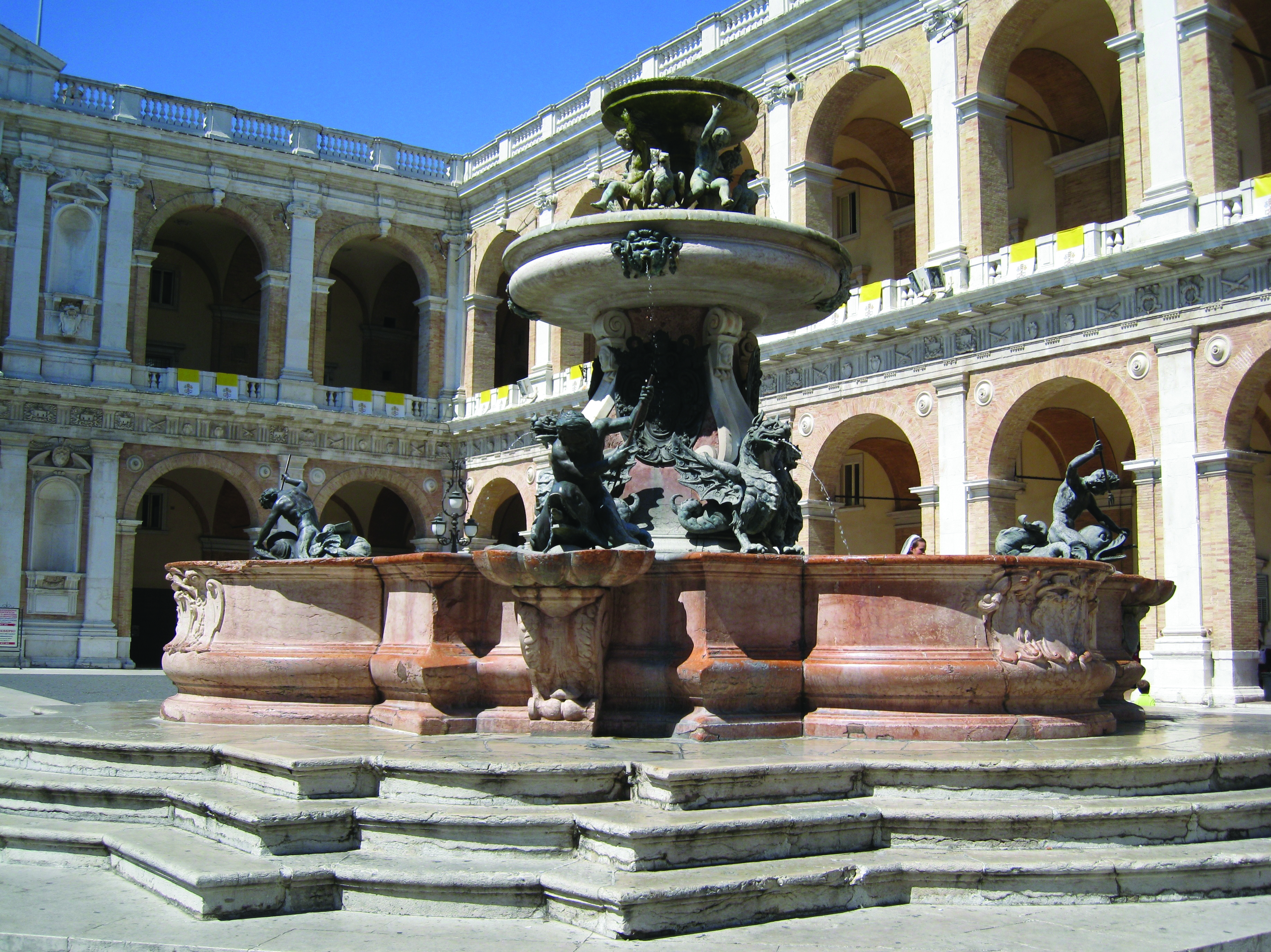 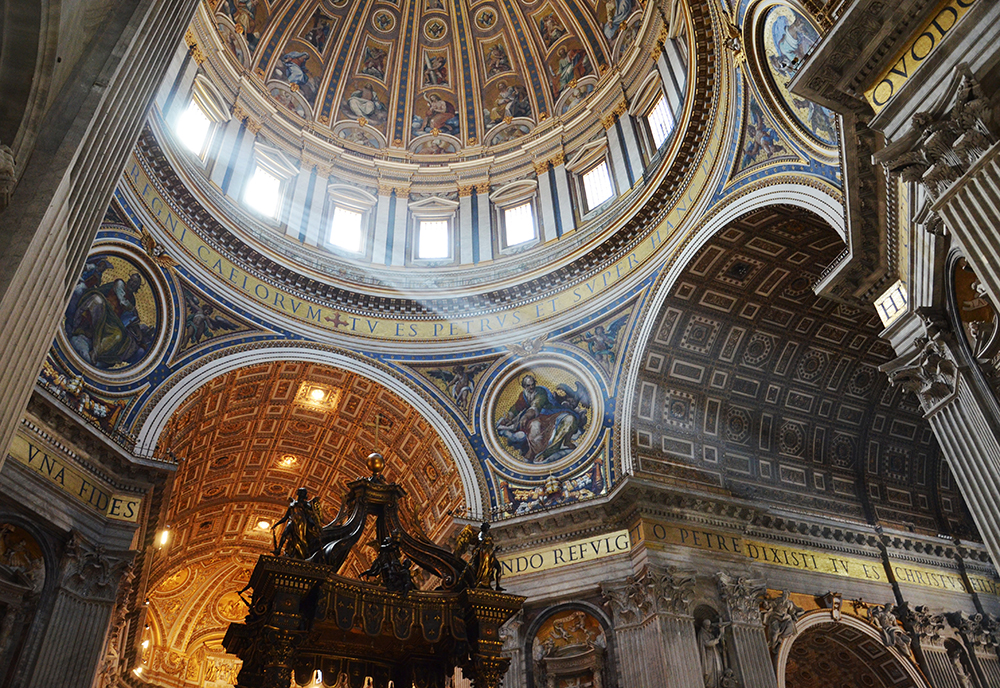 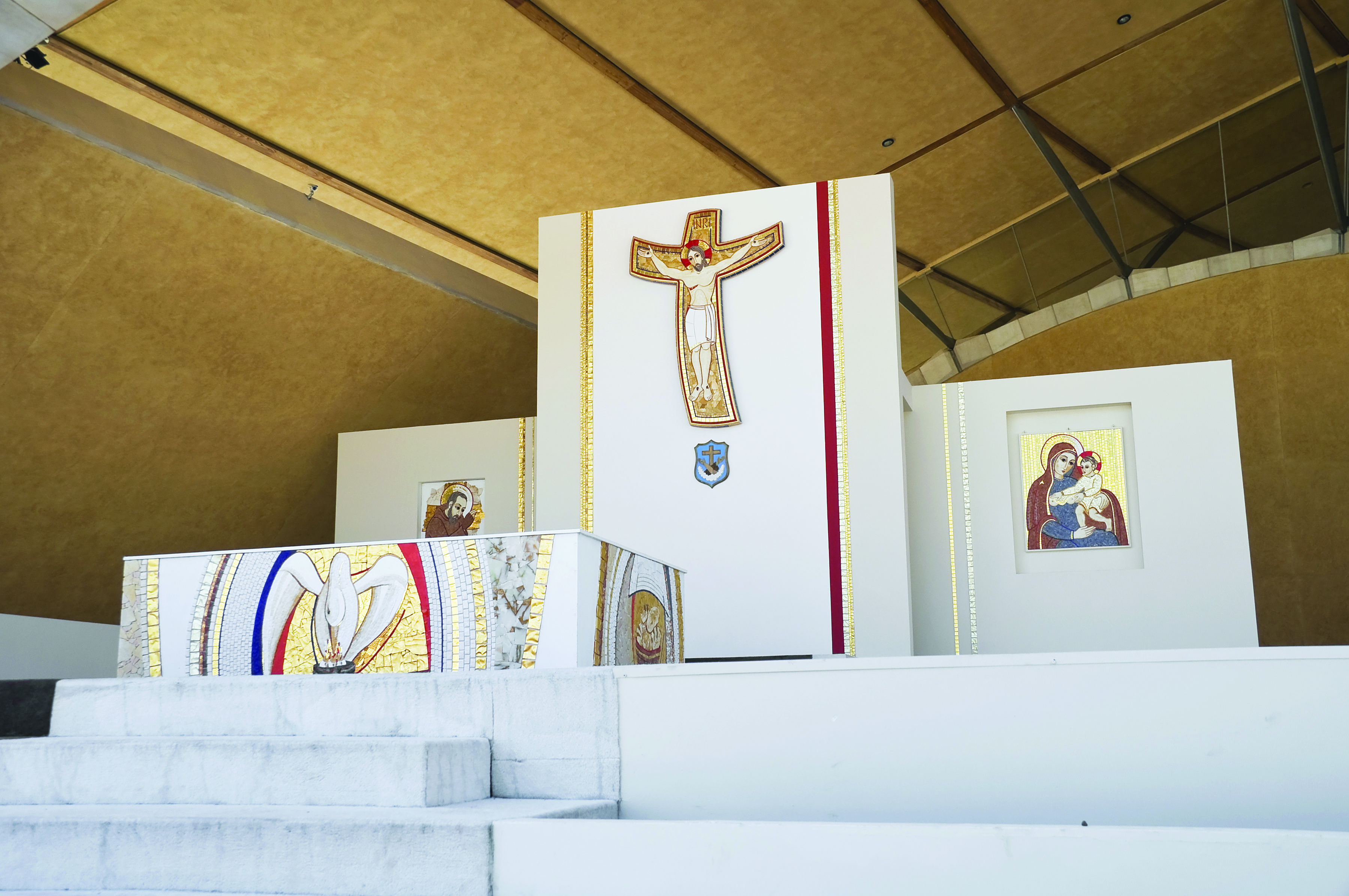 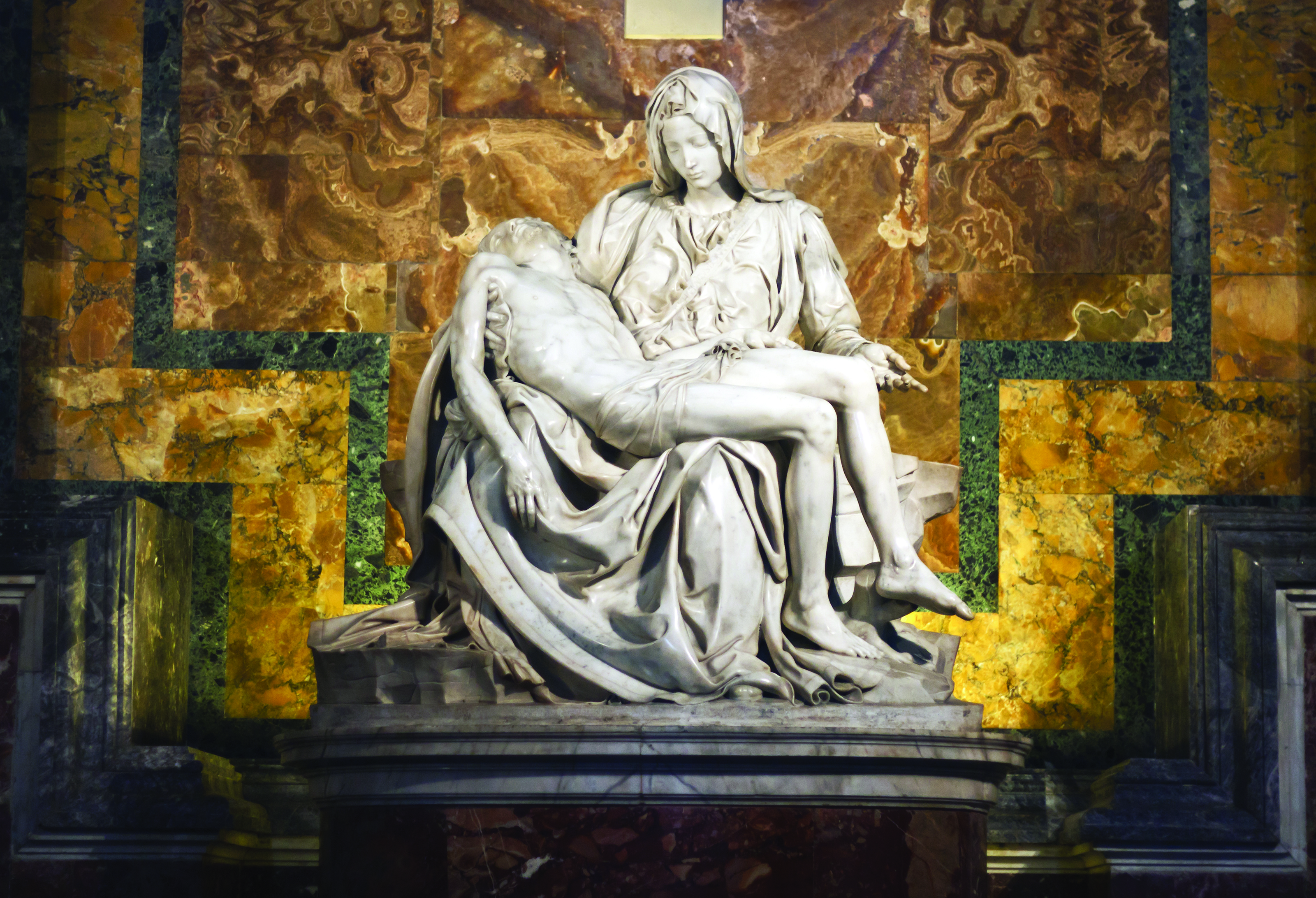 Join us on an inspirational journey through the rolling hills and lively cities of beautiful Italy. Attend the weekly papal audience and receive the blessing given by His Holiness, Pope Francis. Discover the incomparable splendor of the Sistine Chapel and St. Peter’s Basilica. Spend time at the Basilica of St. Francis in Assisi, the beloved saint’s hometown. Stay two nights in San Giovanni Rotondo, and pray in the church dedicated to St. Pio of Pietrelcina – “Padre Pio.” Reflect at the Grotto of Michael the Archangel, on the rugged Gargano Peninsula. Discover the Abbeys of Santissima Trinita and Montecassino. In the town of Pompeii, have time at the Madonna del Rosario Sanctuary, one of the most famous shrines of Christianity.

Enjoy an Italian Serenade at a very popular Roman restaurant, where you’ll indulge in a hearty, traditional, four-course menu complete with wine. As you savor the delicious tastes of Italy, talented performers entertain you with a mix of favorite folk songs and arias from best-loved operas. This lively, fun-filled evening will be an unforgettable part of your visit to Rome and an engaging immersion into Italian culture. After dinner, embark on the enchanting Rome by Night tour, seeing the famous landmarks of the “Eternal City” illuminated in the night sky. Make your way along the Tiber River, passing by Tiberina Island. Admire the ancient city walls before seeing the Colosseum from afar, lit from within, radiating against the darkness around it. Remember your evening of Italian romance and charm with a souvenir opera CD – one per couple and one for singles. Duration approximately 4 hour(s). Transportation is included. A minimum of 10 passenger(s) is required to operate this option. Gratuities are included.

The beautiful city of Florence is a gem in the crown of the renowned region of Tuscany, and its capital city should not be missed. Enjoy a wonderful full day of shopping and sightseeing as a local expert highlights such treasures as the Ponte Vecchio, Palazzo Vecchio, Piazza del Duomo, the famed Cathedral of Santa Maria del Fiore and Piazza della Signoria. You will also visit the Church of Santa Croce, one of the oldest and largest Franciscan churches in the world. Before your return to Assisi, take some time at leisure to savor the local flavors of this region and shop in the wonderful boutiques and acclaimed handicraft shops that Florence offers. Duration approximately 12 hour(s). Transportation is included. A minimum of 15 passenger(s) is required to operate this option. Admission to the museum and the use of headsets is included. Time for lunch will be allotted, but lunch is not included.

Your tour opens in Rome. This evening, join your fellow travelers for a special welcome dinner at a popular local restaurant featuring regional delicacies and fine Italian wines.

Travel north to Assisi and begin your tour at St. Mary of the Angels Basilica, where St. Francis spent most of his life. Pause to reflect at the Chapel of the Porziuncola, the rose bush, and the cave where the saint prayed. Later, have time at the Church of St. Clare, who founded the Order of Poor Clares and followed the teachings of St. Francis by living a life of poverty and humility. Kneel before the crucifix from which Jesus spoke to St. Francis, asking him to rebuild his church. Join a local expert for a fascinating tour of Assisi highlighting the huge 13th-century basilica where you can see many of St. Francis’ possessions and a series of frescoes depicting his life. Celebrate Mass in the Basilica of St. Francis this afternoon.

Enjoy a full day at leisure to independently explore historic Assisi. Or, join a full day optional excursion to Florence, the “Renaissance City,” where a local expert provides a leisurely paced walking tour featuring the Piazza del Duomo, the Cathedral of Santa Maria del Fiore – one of the largest in the Christian world, and the Baptistery doors. You also view the Palazzo Vecchio and the Ponte Vecchio. Enjoy several hours at leisure in Florence before returning to Assisi.

Travel across the Apennine Mountains toward the Adriatic Coast to the Marian shrine of Loreto. Discover the Holy House of Nazareth and the beautiful Madonna of Loreto where more than 50 popes have made a pilgrimage. You will celebrate Mass before continuing your journey to San Giovanni Rotondo, home of Padre Pio.

Begin your day with a special visit to Monte Sant’ Angelo. Take in the breathtaking views of the Gargano Peninsula and explore one of the most celebrated shrines of early Christianity – the Grotto of St. Michael the Archangel. Many popes and saints have knelt and prayed at this grotto, seeking the protection of Saint Michael. Later, return to San Giovanni Rotondo and celebrate Mass in the sanctuary of Padre Pio. This is followed by a tour of the sanctuary, including the old church and the crucifix from which he received the stigmata in 1918, as well as Padre Pio’s tomb. Then, visit the new church dedicated in 2004 to Saint Pio of Pietrelcina. You will also see the confessional where Padre Pio spent many hours directing pilgrims on their journey toward God.

Journey through the picturesque landscape of the regions of Apulia and Campania to Cava de Tirreni. Be introduced to the Benedictine Abbey of Santissima Trinita, founded in the 11th century by a local saint. After a guided visit to the abbey you will have the option of celebrating Mass.

Continue your travels to the town of Pompeii where you will visit the Madonna del Rosario Sanctuary, one of the most famous shrines of Christianity. Later, travel to Montecassino to discover the renowned abbey founded by St. Benedict in the 6th century A.D. This sacred place houses the relics of St. Benedict and his sister, Saint Scholastica. Montecassino also became famous during the battles that took place here during World War II, when the abbey was bombed and destroyed. End your day in Rome.

This morning, attend the weekly papal audience* at Vatican City to receive the blessing given by His Holiness, Pope Francis. Later, visit the Vatican Museum** where you will view such historical treasures as the Sistine Chapel and Michelangelo’s restored mural of the Last Judgment. Then it’s on to the breathtaking St. Peter’s Basilica, built on the site where St. Peter was martyred. Known as the grandest of the world’s churches, St. Peter’s is unsurpassed in beauty.

Begin your day at the Basilica St. Paul Outside the Walls; the remains of St. Paul are located under its main altar. You’ll celebrate Mass before making your way to the catacombs where early Christians fearing persecution hid and buried their dead. Continue on to visit the other major Roman basilicas, St. Mary Major and St. John in Lateran, the former residence of the popes prior to their return to Rome in 1377. This evening, join your fellow travelers for a farewell dinner celebrating the end of a memorable pilgrimage to Italy.

Your tour comes to a close in Rome.

Compare tour This tour has been added to the comparison list. Cick here to view.
Visit website Enquire Save up to £600 per person off advertised prices on selected tours for departures until end of April 2019. 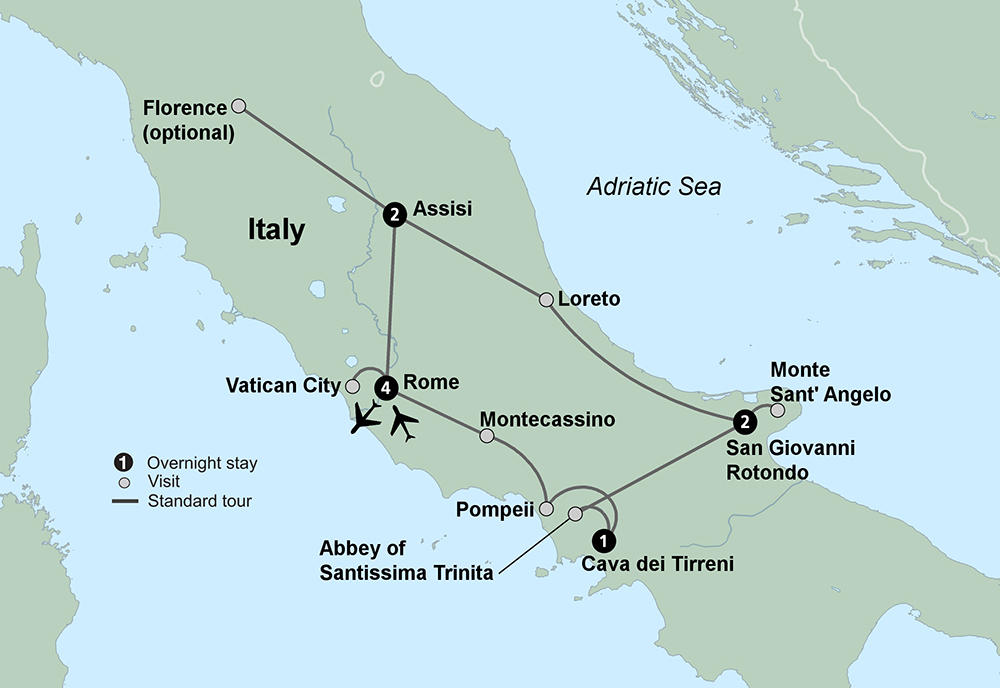