The weather-beaten Atlantic Coast is famed for its colourful fishing villages, picture-perfect lighthouses and warm and friendly residents. From the historic city of Halifax, Nova Scotia, via scenic Prince Edward Island to the impressive landscapes of Newfoundland, this comprehensive small group tour takes in the many highlights of eastern Canada.

Day 1: arrive in Halifax, Nova Scotia. Fly to Halifax, the capital of the maritime province of Nova Scotia. Make your own way to the hotel for a two-night stay. Begin with a welcome meeting at 6pm where you’ll meet your tour leader and fellow travellers. Afterwards, enjoy a free evening to explore the gorgeous Halifax waterfront. Once the gateway into Canada for over a million European immigrants, today, the historic boardwalk is a lively hub of shops, galleries, restaurants, bars and in the warmer months, tall ships. It’s a great place to sample some fresh local seafood, and if you’re lucky, local music as well.

Day 2: around Halifax. Venture outside of Halifax to visit some of Nova Scotia’s popular sights starting with a morning visit to Peggy’s Point Lighthouse. Situated in the picturesque fishing village of Peggy’s Cove, overlooking the cool Atlantic and perched on wave-washed boulders, the striking white and red lighthouse is an enduring image of Canada’s East Coast. Continue to the harbourside town of Lunenburg, located on the island’s historic South Shore. Its Old Town was crowned a World Heritage site for its well-preserved British colonial architecture. Wooden houses painted in a rainbow of colours from the 18th century now house an eclectic mix of shops selling artisan goods, galleries and restaurants. The Bluenose II, a replica of an important fishing schooner in Canadian history can usually be seen moored in the port.

Day 3: Halifax - Prince Edward Island. Travel north to the Bay of Fundy, home to the highest recorded tides in the world. More than 100 billion tonnes of water move in and out of the bay twice a day, providing a unique opportunity to explore the bottom of the ocean floor. What’s more, steady erosion from the tide has carved sea caves, rock formations and cliffs into the landscape and revealed 300 million-year old dinosaur fossils. Twelve species of whale are also frequently spotted along the shores. From here cross into New Brunswick to visit the eerily beautiful Hopewell Rocks Park. There you will find unusual twisted ‘flowerpot’ rock formation as tall as 20 metres (70 feet) caused by tidal erosion from the Bay of Fundy. Afterwards, enjoy the scenic drive to Prince Edward Island crossing the water via the world’s largest bridge, Confederation Bridge and settle in for a 3-night stay.

Day 4: explore Prince Edward Island. Enjoy free time to explore the rocky red cliffs, wind-sculpted sand dunes and sandy beaches of Prince Edward Island National Park. Stretching across the islands north shore, facing the Gulf of St Lawrence, the park boasts miles of hiking trails that lead through woodlands and tranquil ponds. Keep your eyes peeled for red foxes, warblers and herons. This is the serene landscape that Canadian author, Lucy Maud Montgomery, grew up in and inspired her beloved novel, Anne of Green Gables. Kindred spirits may want to visit Green Gables Heritage Place, a restored farmhouse that was once owned by Montgomery’s cousins and served as the inspiration for Anne’s fictional home.

Day 5: visit Charlottetown, PEI. Head to Charlottetown, PEI’s picturesque capital city with a charming small-town feel, for another free day. Compact and easy to explore, you might want to hire a bike and explore the network of walking trails and waterside boardwalks that take you past colourful wood houses, Victorian buildings and historic monuments. Or you could stroll along Victoria Row, a pretty street line with interesting shops and restaurants featuring fresh seafood and local produce. Charlottetown played an important role in the founding of Canada; history buffs might want to spend the day checking out the monuments, historic buildings and galleries showcasing Canada’s heritage that are sprinkled throughout the city. In the evening, meet back up with your tour leader for an included seafood dinner.

Day 6: PEI - Cape Breton Island, Nova Scotia. Take a short ferry from PEI to the north shore of Nova Scotia to visit Caribou-Munroes Island Provincial Park. Like other parts of the Maritimes, the landscape has been carved by wind and wave to fascinating effect. Boasting serene, unspoiled nature, a series of interconnected trails travels from saltwater lagoons and sheltered marshes to small, secluded beaches and wooded areas of white spruce, balsam fir and maple. Bird-lovers might be lucky to spot a bald eagle or osprey soaring above.

Day 7: exploring Cape Breton Island. Cape Breton Highlands National Park is a place where the mountains meet the sea and will leave you in awe. You’ll have the chance to hike along the rugged coastline, where steep cliffs and deep river canyons characterise miles of jaw-dropping trails. As you walk among 350-year old trees, make sure to keep an eye open for moose, bald eagles and other wildlife. In the afternoon, you can choose to go on an optional whale watching tour (additional cost) where it’s possible to see minke whales, pilot whales and harbour seals.

Day 8: exploring Cape Breton Island. In the morning, put on some comfortable shoes and embark on a scenic 2-km hike along the Cape Breton coast. Starting at the Louisbourg Lighthouse, the aptly name Lighthouse Trail first winds through forest and wetlands, then continues along the coast. Take in stunning ocean views as the waves crash into the rugged coastline before arriving at the historic Fortress of Louisbourg. A one-quarter reconstruction of the original French town and fortification, the fort played an important role in Canada’s early history. You’ll have time to admire it from the front and head inside to explore the grounds within. Head to North Sydney for an overnight stay.

Day 9: Cape Breton - Port Aux Basques, Newfoundland. Be prepared for a long day of travel for the journey to Newfoundland. Following the 90-minute drive to the port, board the 5.5 to 7-hour scenic ferry journey to the west coast of Newfoundland. Arrive in Newfoundland in time for dinner and a walk along the sleepy harbourfront.

Day 11: L'Anse aux Meadows. Continue your adventure through Gros Morne National Park with an included two-hour cruise on Western Brook Pond. This land-locked body of water is Gros Morne’s largest lake and is home to Atlantic salmon, brook trout, arctic char as well as a colony of cliff nesting gulls. On board your cruise, you’ll see waterfalls cascading off the carved cliffs, deep glacial waters shimmering against the rugged backdrop and wildlife sightings aplenty along the way. Afterwards, make tracks further north towards L’Anse aux Meadows. After travelling for around 5 hours total, stay the night in a nearby town.

Day 12: Gros Morne National Park. Continue on your way to explore the L’Anse aux Meadows National Historic Site. Sitting at the northernmost tip of Newfoundland, L’Anse aux Meadows is thought to be the first place Vikings settled in North America. This is the fabled Vinland from Norse Sagas. Here, you’ll get the chance to explore 1000-year-old Norse ruins and original artefacts, as well as a recreated base camp for a fascinating glimpse into the early Viking experience. Later in the day, head back to Gros Morne National Park, where there may be time to take on one of the park’s hiking trails through a range of landscapes, and to some pretty epic lookouts.

Day 13: Gros Morne - Gander. Travel from the west coast to the east coast of Newfoundland and stop at Gander. This quaint town of around 10,000 has a unique history – once a crucial trans-Atlantic stopover for international flights in the early-to-mid 1900s, in 2001, 38 planes were forced to land at the airport because of the 9/11 terror attacks. This town’s generous spirit and kindness opened their doors travellers from all corners of the globe for six days until US airspace was re-opened and even inspired a hit Broadway musical – Come From Away! Check out where these passengers spent their time, and perhaps head on an optional visit to the aviation museum to learn more about all things flying.

Day 14: Gander - St John's. Visit Terra Nova National Park where you may have time to hike one of the parks many trails, so keeping an eye out for wildlife, including moose, caribou, coyotes and beavers. Continue to Newfoundland’s capital and the oldest city in North America, St John's. Vaguely resembling San Francisco due to the colourful wooden row houses perched on a hill – known locally as Jelly Bean Row – St John’s definitely has a small-town feel. Spend time exploring its historic downtown, where museums, restaurants and artisan shops can be found along winding streets. For more hiking, trek up Signal Hill or walk the Grand Concourse – a series of trails that connect historic sites, parks and Victorian buildings. Tonight, if there’s time, head to one of St John’s’ pubs for a ‘screech-in’ – an unusual Newfoundland ceremony! 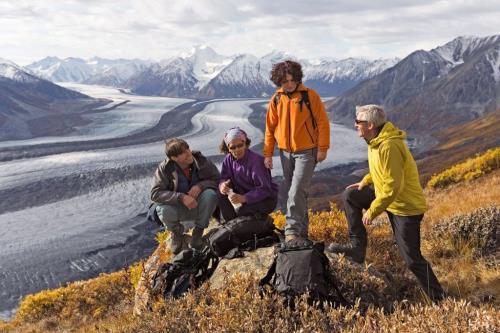 Hiking the Yukon and Alaska 14 Nights from pp 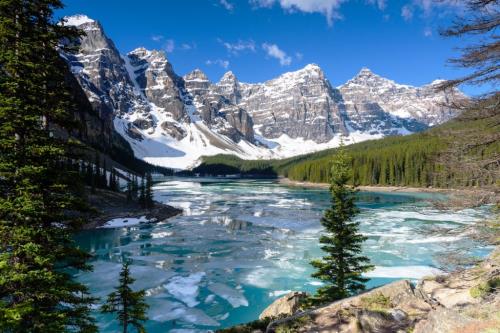