The mysteries of the East

Fascinating and mysterious, vast, sweeping and truly, wholly, a world away from the West, China is a wonder to behold, and a joy to experience. Join this superb-value escorted tour to discover the very best of this extraordinary country. Stay excellent, modern hotels, and discover Shanghai, where ancient and ultramodern worlds collide, the breath-taking sights of the mesmerising capital, Beijing, and part of the Great Wall. Visit ancient Xi'an with its iconic, world-famous army of Terracotta Warriors, and cruise down the Li River through a timeless landscape of paddy fields. Less a holiday and more a journey of discovery, this is the perfect introduction to the wonders of China.

An excursion to the astonishing Great Wall of China
See the extraordinary Terracotta Army
Visits to Tiananmen Square, the Forbidden City and the Summer Palace in Beijing
A guided tour of old and new Shanghai, including the iconic Pearl Tower
Shanghai's Old City and Yuyuan Chinese Gardens
A city tour of ancient Xi'an
A traditional Peking Duck Dinner
Marvel at Beijing's stunning Temple of Heave
Journey along the languid Li River - home to traditional cormorant fishermen - to Yangshou

Fly overnight to Shanghai to begin your wonderful holiday.

Upon arrival, you'll meet your guide and transfer by coach to your overnight hotel, before enjoying a guided introduction to this amazing city. The colonial grandeur of the buildings that line the famous Bund hint at past glories despite the towering skyscrapers that surround them, and the rocket-shaped Pearl TV Tower (a visit to which is included in the tour, and from which the views are simply breathtaking) soars above them all from the opposite bank. You'll also have time to discover the treasures held in the Shanghai City History Museum.

This morning you'll tour the bustling bazaars of Shanghai's historic Old City, at the heart of which is the 16th-century, classical Chinese Yuyuan Garden, with its pools, walkways and bridges. After a fascinating morning, you'll travel by high-speed rail to Beijing for a three-night stay.

Enjoy a fascinating tour of China's astonishing capital. First stop is massive Tiananmen Square, site of Chairman Mao's Mausoleum and the Great Hall of the People, and which faces the best-known image of Imperial China, the huge complex of imperial palaces known as the Forbidden City.Inside this immense palace you'll see the ceremonial spaces, working areas and private quarters once used by its privileged occupants before heading to the beautiful Temple of Heaven in Tiantan Park, the great Ming Dynasty shrine that was the heart of ceremonial life for five centuries. Later, celebrate the end of your first day in Beijing with a 'Peking Duck' dinner.

Travel out of the city, to see for yourself part of what is famously (though not entirely accurately) known as the only man-made structure visible from space, the Great Wall. At Badaling, amid steep, forested hills, part of the wall has been lovingly restored, and it's easy to appreciate the immensity of this marvellous feat of engineering.Your day will also include time to view the famous Olympic 'Bird's Nest' stadium and, later, an optional excursion is offered to the world-famous Peking Opera.

Take a trip back in time on our rickshaw tour of the ancient hutongs, the labyrinth of narrow alleyways and courtyard houses that epitomises 'Old Peking', before heading outside the city-centre to discover the tranquil lakeside pavilions of the Summer Palace.In the afternoon we'll travel to Xi'an by high-speed rail.

Today you'll visit the now legendary Terracotta Army of the first Chinese Emperor, Qin Shi Huang. An estimated 8,000 lifelike foot-soldiers, horsemen and charioteers were discovered in their vaults in 1974, and now are one of the world's greatest tourist attractions.Later, head back to the city to spend some time on the fortified city walls of old Xi'an.

This morning, you'll head out to explore the ancient city of Xi'an, which is centred on its enormous bell-tower. Visit the Muslim Quarter with its Great Mosque, and marvelling at the Tang dynasty monuments.In the afternoon, fly south to Guangxi province and the historic city of Guilin, picturesquely set on the Li River. Take a guided tour of this medieval city, and see the ancient South Gate, the Farmers' Market and the peak of Fubo Shan, with its caves and carved grottoes, and then enjoy the evening in this lively city.

This morning you'll board a river cruiser for the unforgettable journey through the stunning scenery of peaks, paddy fields on the green-tinged waters of the Li. You'll stay overnight in Yangshuo, a thriving resort set amid some spectacular scenery. This evening, there's a stunning, optional Light Show to experience.

After breakfast, you'll transfer to the airport and fly back to Shanghai for the last night of your tour. Once back in the city you'll have the chance to enjoy an optional night-time cruise on the Huangpu River - a fitting way to end your visit to this great country.

Early this morning you'll transfer back to the airport for your daytime flight home, at the end of a marvellous holiday.

China: The Big One 27 Nights from pp 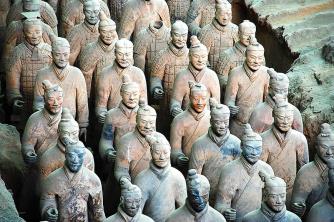