This exciting holiday focuses on the archaeology of ancient Egypt. You'll be able to visit and explore some of the great sites including the Pyramids of Giza and the Sphinx, Abu Simbel and Valleys of the Kings and Queens.

All your visits will be accompanied by a knowledgeable local guide, helping to ensure you get the most out of your visits. There will also be three archaeological talks at your hotel, perfect for helping to understand of the archaeology of this fascinating country. Your Saga Host will advise you which evenings the talks will take place. You can also look forward to a cruise along the River Nile on board your Presidential Nile ship, the perfect base from which to explore and to also enjoy a little relaxation as your cruise through the countryside.

<p>Fly to Cairo and stay three nights at the locally rated 5-star <strong>Pyramisa Hotel</strong>. Set in the heart of Cairo, overlooking the Nile, this 377-room hotel is close to a downtown shopping area. D</p>

<p>Memphis was one of the greatest cities of the world from 3,100BC until Roman times and now consists of scattered ruins, alabaster sphinxes and statues among the palm groves. Continue to Sakkara &ndash; an immense necropolis about eight kilometres long and one-and-a-half kilometres wide, which was used from prehistoric times until the Roman period. Next visit the three Pyramids of Giza &ndash; the Great Pyramid of Cheops and the two smaller pyramids of Mycerinus and Chephren &ndash; which have become the symbol of Egypt. Wonder at these along with the Sphinx, carved out of a natural outcrop of rock in the form of a lion with a human head.</p> <p>Entrance into the Great Pyramid is not included (and is at times prohibited). The pyramids can be closed at times for restoration work, and entrance to the interior may be prohibited. B, L, D</p>

<p>Enjoy some free time in Aswan, which occupies a beautiful setting on the Nile. B, L, D</p>

Day 7 Aswan to Luxor to Edfu

<p class="p1">Travel by train from Aswan to Luxor, a journey of approximately three hours. Upon arrival, board <strong>MS Nile Plaza</strong> (5?) for a six-night Nile cruise. Enjoy lunch on board before sailing to Edfu, on the west bank of the Nile, where you&rsquo;ll moor overnight. B, L, D</p>

<p class="p1">Sail to Kom Ombo in the morning and visit the ancient temple dedicated to Horus and Sobek. Later continue sailing to Aswan where you moor overnight. B, L, D</p>

<p class="p1">An early start is required for the journey to Abu Simbel by road for your included excursion.</p> <p class="p1">A local guide will take you around the monuments, a magnificent complex of rock-cut temples dedicated to Ramses II and Queen Nefertari. The great temple has four giant statues of Ramses II guarding its entrance, each 20 metres tall, and there are also beautiful carvings. The smaller temple of Hathor, the goddess of happiness and love, has six large statues on its facade.</p> <p class="p1">Later return to Aswan where you remain moored overnight. B, L, D</p>

<p class="p1">Spend a day at leisure. This afternoon, continue your river cruise back to Edfu. B, L, D</p>

<p class="p1">Spend the morning at leisure then continue to Luxor where you will moor overnight.</p> <p class="p1">This evening enjoy a farewell dinner. Perhaps join an optional excursion to a Sound and Light show. B, L, D</p>

Day 12 Valleys of the Kings and Queens

<p class="p1">You'll pass the Colossi of Memnon, gigantic statues that once guarded the funerary temple of Amenophis III,on today's included excursion. The highlight will undoubtedly be a visit the City of the Dead in Thebes where you can walk through the Valleys of the Kings and Queens.</p> <p class="p1">In the afternoon, perhaps take the opportunity to visit the Karnak and Luxor Temples on an optional excursion. B, L, D</p>

<p>Travel to the airport for your return flight home. B</p>

6 nights in hotels and 6 on board cruise ship 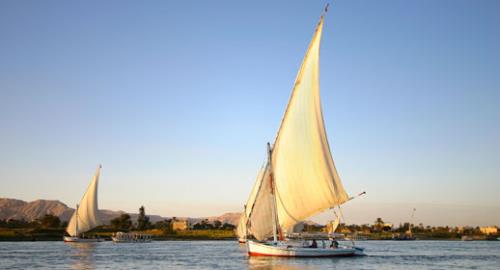 Magic of the Nile 10 Nights from pp 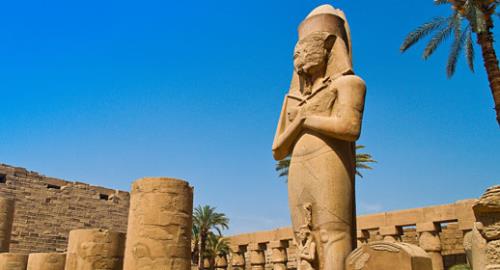 Land of the Pharaohs 12 Nights from pp

Wonders of Egypt 11 Nights from pp