This rail tour visits the cities of Vienna, Graz and Salzburg, including two concerts in Vienna and Salzburg, plus a behind-the-scenes tour of the Vienna State Opera House

Discover three of Austria’s imperial cities – Vienna, Graz and Salzburg – on this scenic tour that links them by rail, enjoying concerts in Vienna and Salzburg, plus a visit to the famous Vienna State Opera House!

Fly to Vienna and enjoy a sightseeing tour of the city which will reveal the landmark Romanesque and Gothic St Stephen's Cathedral and the famous late 19th-century Ringstrasse which is lined with grand buildings, monuments and parks.

Spend the next three nights at the locally rated 4-star Derag Livinghotel Kaiser Franz Josef. It's only a short tram ride away from the historic centre. This evening, there will be a short orientation walk, concluding at a typical Viennese Heurigen, where you will have dinner, while enjoying live music. D

Famous for its beauty, romance, history and culture, it was the centre of the Habsburg Empire for six centuries, the city where Marie-Antoinette grew up, Johann Strauss the Younger wrote many of his waltzes and where Mozart died. Get to know it firsthand on a walking tour of the historic centre where you can see such sights as the imperial Hofburg complex, built by Emperor Franz Josef, the famous Spanish Riding School, St Stephan’s Cathedral and the imperial crypt. You’ll then head for the Vienna State Opera House, one of the world’s great opera houses. Originally built in 1869 the building suffered substantial damage during the Second World War, and did not re-open until 1955.

Look forward to a guided tour when you can learn about the history, architecture and organization of the opera house, affording a fascinating ‘behind the scenes’ view. This evening head for the elegant Wiener Kursalon, originally built as a society recreation centre but rapidly became a centre for promenade concerts, where Johann Strauss performed and conducted. Take your seats for a performance by the Salonorchestra Alt Wien, including works by Strauss and Mozart as well as vocal music and dancing. B

From excellent museums and beautiful architecture, to famous coffee shops and one of the world's finest opera houses, there's no shortage of things to see and do during a day at leisure in Vienna.

Of special note is Vienna's Prater which is set in the former hunting grounds of the Habsburgs and where you'll find the city's giant Ferris wheel and the neighbouring ‘Green Prater’. This enormous parkland of forests and water meadows is dissected by a four-and-a-half kilometre long pedestrianised avenue lined with 2,500 mature trees!

Alternatively, take the opportunity to visit the scenic Vienna Woods on an optional excursion. This evening, look forward to dinner is at a local, traditional Schnitzel restaurant. B, D

Travel to the train station this morning to board your high-speed railjet train to Graz, Austria's second city which is set in the south eastern state of Styria.

The journey encompasses the famous Semmering railway, a feat of mid 19th-century engineering which runs from Gloggnitz to Mürzzuschlag. Hailed as ‘the world's first true mountain railway’, its 41 kilometres of track encompasses impressive switchback passes, tunnels and viaducts as it snakes through the stunning high mountains, reaching an altitude of 895 metres above sea level. No wonder it's on UNESCO's esteemed World Heritage List.

You'll arrive in Graz around lunchtime where an included half-day sightseeing and walking tour will reveal a harmonious blend of architectural styles that date back to the Middle Ages, placing it on UNESCO's list.

Stay three nights at the locally rated 3-star Hotel Restaurant Gollner, a family-run hotel which is set 30 kilometres outside the city centre in Lebring. B, D

Travel into the unspoilt Austrian countryside to visit the country's only federal stud farm, the visitor centre of which is housed in a majestic baroque mansion.

The farm has been breeding world-famous Lipizzaner stallions, Europe's oldest thoroughbred horse, since 1920. Around 30-40 foals are born here each year where they get to spend their youth galloping in the surrounding meadows. The cream of the crop are then sent to Vienna's Spanish Riding School where they will go on to demonstrate the art of classical dressage. Enjoy a tour of the farm to learn more about how these graceful horses are reared, before enjoying a typical Styrian lunch with a folk trio performing as you eat.

Afterwards, discover Styria's other claim to fame, pumpkin seed oil which has been a local delicacy since the reign of the Habsburg Empire. Still produced the old-fashioned way in artisanal mills, you'll have the opportunity to enjoy a tasting of Austria’s nutty-flavoured ‘black gold’ during a guided tour. B, L

Enjoy a day at leisure to experience the city's sights and sounds at your own pace. Attractions here include the forested public park and hilltop park, Schlossberg, which rears above the historic streets, to more modern attractions, such as the island in the river and the Kunsthaus Graz, the modern art museum. Alternatively, tick a third country off during your tour on an optional excursion to Maribor in Slovenia. B, D

After some free time at the hotel this morning, travel to the main train station in Graz for your half-day train journey to Salzburg. This scenic Alpine route crosses the Dachstein Mountains, passing by such idyllic towns as Schladming, Radstadt and Bischofshofen.

Arrive in the afternoon for a three-night stay at the locally rated 4-star Amadeo Hotel Schaffenrath. B, D

Discover Salzburg on a guided walking tour today, including a visit to Mozart’s birth house.

The city’s remarkably well-preserved old town – Alstadt – is a UNESCO World Heritage Site and looks much as it did during Mozart's day. The architecture ranges from medieval to 19th century with a skyline punctuated by spires and domes. Sights include the cathedral and its square the Complatz, the Mirabell Gardens – famous as a film location in The Sound of Music, as well as to the spectacular Hohensalzburg Fortress. This 11th-century celebrated landmark sits above the city commanding spectacular views and is famed as a concert venue.

You’ll also visit Mozart’s birth house, where the composer was born on the 27 January, 1756. The house is now a museum with an exhibition relating to Mozart, his life and work.

This evening, take your seats at the Hohensalzburg Fortress.for a concert, when you can look forward to hearing music performed in the glittering ‘golden hall’ of the fortress, with a programme that is sure to include some works by the city’s most famous son! B

Explore the highlights of stunning Salzkammergut, Austria's majestic lake-filed region which is set amid the Alpine peaks, on today's included excursion.

Travel to the quaint village of St Gilgen for a magical boat ride on lake St Wolfgang, a beautiful body of water fringed by mountains. Afterwards, continue to the Alpine town of Hallstatt, which boasts a stunning setting on the edge of Lake Hallstatt and is built into the side of the towering Dachstein Mountains. This historic salt town and the surrounding landscape form another entry on the UNESCO World Heritage List.

Return to Salzburg, pausing en route in the handsome spa town of Bad Ischl. B, D

Travel by train to Munich airport for your return flight to the UK. B

Plus, this hotel features: 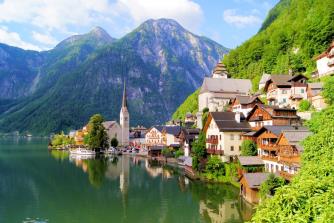 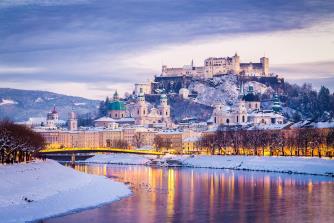 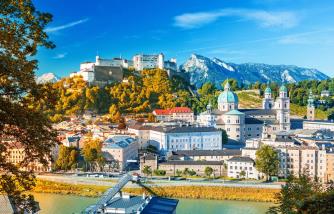