Travel off-the-beaten-track to explore the rugged beauty of the unspoilt islands of the Azores on this exciting escorted journey.

The unspoilt islands of the Azores are famed for their stunning natural beauty of rugged cliffs, volcanic craters, towering peaks and bubbling hot springs. This tour offers a flavour of three of these islands – São Miguel, Terceira and Faial – which are scattered like jewels in the Atlantic Ocean.

Depart the UK for your flight to Ponta Delgada on the island of São Miguel. Continue to the locally rated 4-star Hotel Marina Atlantico for a four-night stay. D

An included half-day tour takes you to the Sete Cidades Crater lake. The Sete Cidades is an extinct volcano that rises approximately 580 metres above sea level. From the edge of the massive crater there's a magnificent view of the two lakes below, one blue and the other green. B, D

An optional full-day excursion takes you to the village of Furnas and Nordeste. B, D

This morning, enjoy an included half-day excursion to Ponta Delgada, capital of São Miguel. Once just a tiny fishing village, it is now the largest town in the Azores, with its Portuguese-influenced architecture evident in its white houses, impressive churches and convents. Particular highlights include the 16th-century St Sebastião and Chapel of Nossa Senhora da Esperanca. This afternoon, an optional excursion to go whale and dolphin watching is available. B, D

Today, travel to the airport for your flight to Faial. Continue to Horta where you stay four nights at the locally-rated 4-star Hotel do Canal (4Q). B, D

Enjoy the day at leisure. B, D

Today’s included full-day tour visits the Capelinhos Museological Nucleus, where you can learn about the dramatic eruption of the Capelinhos volcano in 1957, and the huge crater, or caldeira. The area surrounding the crater is protected and depending on the season, you may see colourful displays of agapanthus lilies or other flowers in bloom. B, D

An optional excursion uncovers the sublime beauty of Faial’s neighbouring island. B, D

Travel to the airport and fly to Angra do Heroismo, where you stay four nights at the locally rated 4-star Terceira Mar Hotel (4Q). B, D

Today you can enjoy a full-day included excursion, exploring both the east and west coasts and the summit of the Serra de Cume with panoramic vistas over Terceira. B, L, D

This morning, an included guided walking tour will reveal the 16th-century town of Angra do Heroísmo, whose highlights include the cathedral, city hall and General Captain's Palace. B, D

Enjoy a day at leisure to go exploring or to relax at your hotel. This afternoon, you could join an optional excursion to West Terceira and Algar do Carvão cave. B, D

After breakfast, travel to the airport for your flight back to the UK. B 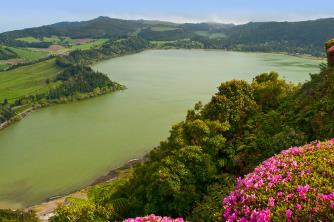 The Beauty of the Azores 7 Nights from pp 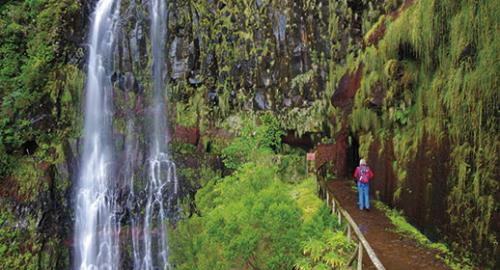