Enjoy a journey of discovery on the Danube and take in some of the very best sights the River Danube has to offer as we visit a number of Europe’s most beautiful capital cities. Explore spectacular Vienna, the hidden gem of Bratislava and the magnificent city of Budapest - each proud of its individual character and heritage.

One of the most magnificent cities in the world, Budapest is filled with incredible sights and sounds. Join us as we take a city tour to learn more about this wonderful capital of Hungary, with its stunning architecture, historical attractions and marvellous culture.

Admire sights such as the Hungarian Parliament building and Liberty Square, with its mixture of art nouveau and historicist architecture. There’s also the beautiful St Stephen's Basilica and the neo-Gothic Fisherman's Bastion.

Discover the old town has and its Gothic-Baroque style. We'll pass St. Martin’s Cathedral and the Grassalkovich Palace and continues up to Castle Hill, where you will have a stunning, panoramic view of the city and surrounding areas.

Afterwards, join a guided walking tour through the old town. Starting at Michael’s Gate, an imposing medieval structure you'll take a leisurely stroll through the historic city center, taking in sights such as the Primatial Palace, the Academia Istropolitana, Bratislava's oldest university dating back to the 15th century. In addition to numerous palaces, you will also walk past the main square with the old City Hall, the Opera House and Maximilian Fountain.

Visit one of the world’s most famous monastic sites. The impressive Baroque abbey was built between 1702 and 1736. The church here features frescos by Johann Michael Rottmayr, and the impressive library has countless medieval manuscripts. A guided tour takes you through the abbot’s chambers, the imperator’s walk, through the marble hall and  balconies to the library. At the end of the tour you can enjoy a complimentary glass of wine.

Join our optional guided tour to learn more about Vienna’s fascinating history, and see why the city has attracted musicians, writers and artists alike. Our tour will highlight some of the city’s amazing architecture, magnificent landmarks and interesting attractions.

Johann Strauss once directed his orchestra in Vienna and you'll enjoy his music and some of the other Austrian greats on an unforgettable evening in the city. The “Salonorchester Alt Wien”, play a range of classical Viennese music. You'll enjoy an evening full of Viennese charm with the lilting sound of waltzes, polkas, arias and duets, as well as operetta and piano concert melodies. Accompanied by excellent opera singers and enchanting ballet soloists.

We visit the summer palace of the Habsburg Dysnasty in the centre of Austria’s capital, Vienna. Schonbrunn Palace contains over 300 years of history as well as beautiful Baroque architecture and vast, lavish gardens. We’ll take the Imperial tour, which gives us a picture of the different stylish eras that have shaped the palace and the lives and history of the people who lived here. Our tour includes a visit to the State Rooms at the palace, designed to the tastes of Franz Josef I and his wife Elisabeth, who ruled Austria-Hungary during the latter 19th century and the early 20th century. At the time the couple was one of the most powerful and important in Europe.

This excursion takes us to the Puszta Hungarian Horse show near to Kalocsa. Along the way enjoy the landscape of the countryside while our guide will let you know a little about Hungarian rural life and culture. The show demonstrates the fantastic relationship between Hungarian horsemen and their horses. If you would like to ride a horse without saddle, you will have the chance after the show. There will be a tasting of Hungarian salami and paprika and alongside local wine in the Csárda restaurant of the farm.

Join us as we visit Esztergom, former residence of Hungarian kings. We start by visiting the vast domed basilica, the largest cathedral in Hungary which was built in the early 19th century, it incorporates an ornate red marble chapel from an earlier church.

We'll then travel continues along the Danube to the imposing ruined fortress of Visegra and onto the artists’ village of Szentendre. Since the early 20th the town has been home to generations of Hungarian artists and there are numerous museums and galleries exhibiting the town's art history. One of these is the Margit Kovács Museum, one of Hungary's most popular museums. Away from artworks the architecture of the town is well worth seeing. Foetér, the main square has impressive Rococo and Baroque buildings. From Szentendre we continue south to along the scenic west bank of the Danube.

An important trade center, connecting several trade routes of the Holy Roman Empire and for a short period of time, the most important city in the Empire. It lost its status to Vienna and Prague in 1493. There are still many things worth seeing in Linz. Stroll down the main street, leading to the main square and the Mozarthaus and see Renaissance villas, the old cathedral with its Bruckner organ and the new cathedral. If time allows, you can taste a piece of the famous Linzer Torte (Linzer Cake) in one of the local bakeries.

Day 1: Embark in Passau, cruise to Emmersdorf
Fly from the UK to Munich and transfer to Passau for embarkation. This evening enjoy a welcome cocktail and dinner. We cruise overnight to Emmersdorf. (Dinner)

Day 2: Emmersdorf to Vienna
We reach Emmersdorf, in the heart of the Wachau Valley. Join an optional excursion to nearby Melk and its magnificent Abbey. The ship then continues on to Vienna, arriving in time to enjoy an optional classical music concert. We moor overnight in Vienna. (Breakfast, Lunch, Dinner)

Day 4: Budapest
After a morning spent cruising we arrive in Budapest at lunchtime. Uniquely located on both sides of the Danube river there are many sights and landmarks to admire on our included guided city tour. A highlight of our cruise awaits, as this evening musicians come on board to entertain with traditional music, as we cruise along the Danube to see this beautiful city by night. Moor overnight in Budapest. (Breakfast, Lunch, Dinner)

Day 5: Budapest – Esztergom - Bratislava
Join an optional excursion this morning to visit the ‘Puszta’ countryside. The ship departs Budapest after lunch and continues to Slovakia. Relax on board or you can enjoy an optional excursion to visit Szentendre, an artist’s village with galleries and art museum; and Esztergom, the former capital city. We continue sailing overnight to Bratislava. (Breakfast, Lunch, Dinner)

Day 6: Bratislava to Linz
Discover the charming Slovak capital of Bratislava, where we take an included guided city tour. We continue to cruise along the Danube this afternoon and enjoy a Captain’s Gala Dinner this evening. Cruise overnight to Linz. (Breakfast, Lunch, Dinner)

Day 7: Linz to Passau
We reach Linz, one of the largest cities in Austria, with time at leisure and perhaps sample some of the famous Linzer torte. Enjoy a final evening on board as we head back to Passau. (Breakfast, Lunch, Dinner)

Day 8: Disembark in Passau
Disembark after breakfast and transfer back to Munich for the flight home. (Breakfast) 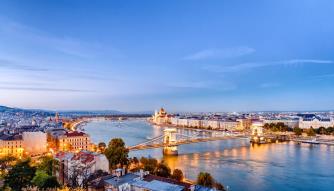