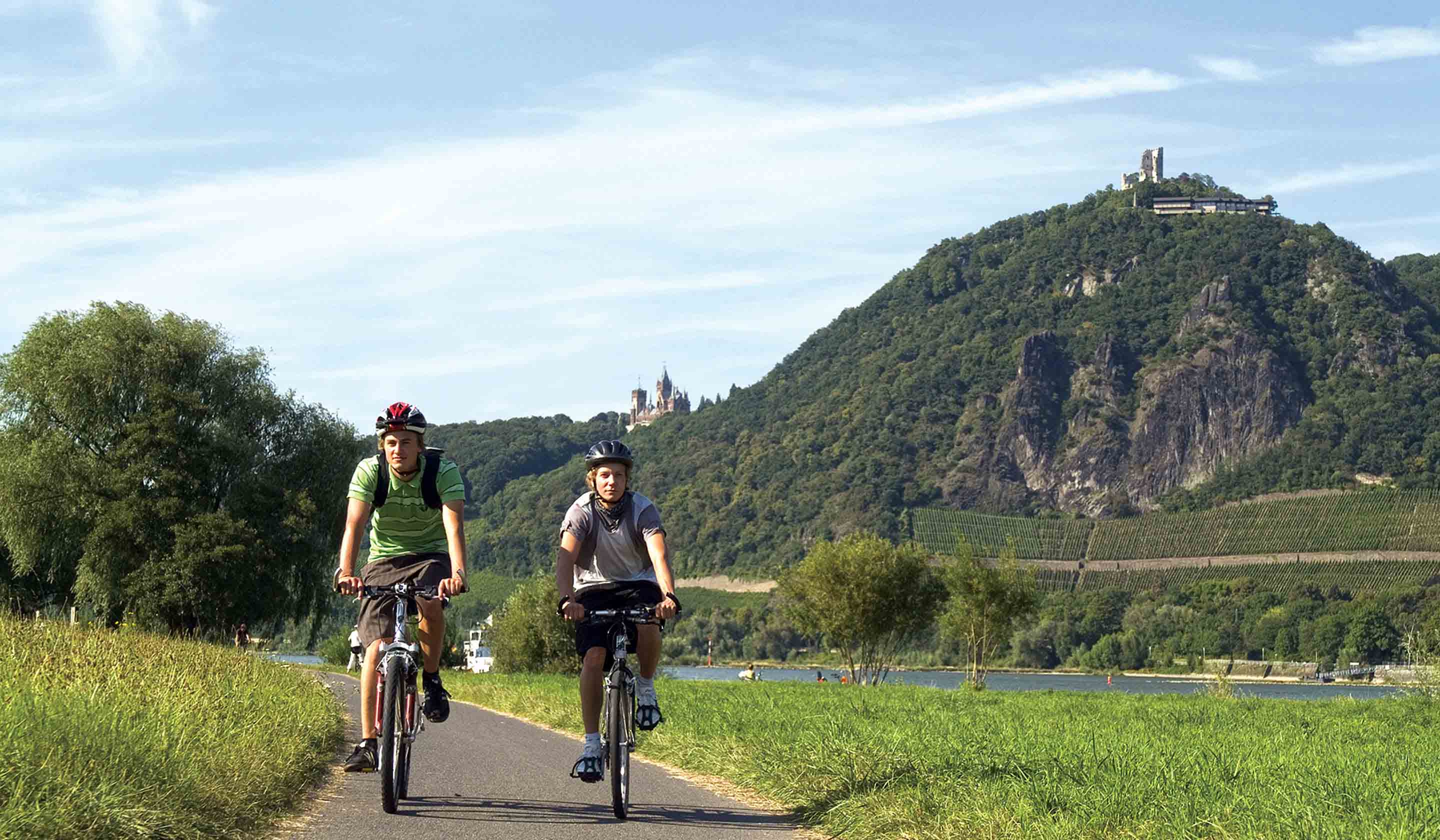 Create cherished family memories on our unforgettable Basel to Amsterdam riverboat cruise along the Rhine River between aboard ms Grace or ms Inspire, visiting Switzerland, France, Germany and The Netherlands for an adventure unlike any other. Family travel experiences include a bicycle ride through forests and vineyards along the Rhine riverside; a taste of fondue, Swiss folklore and more in lakeside Lucerne; a ride aboard the world’s steepest cogwheel train to the top of Mt. Pilatus in the Swiss Alps; exploring the fascinating ruins of hilltop Heidelberg Castle in the medieval university town of Heidelberg; learning about the Lorelei and other Rhine River legends while keeping an eye out for fairy-tale castles; discovering the art treasures and historic canals of Amsterdam; an exclusive gala dinner for Tauck guests only at Burg Satzvey, a medieval moated castle in Germany; becoming “French for a Day” aboard the riverboat with French language lessons, songs, a cooking demonstration and a chocolate tasting; an onboard "Carnival night" and much more!

<strong>Tour&nbsp;begins: 4:00 PM, Amsterdam.</strong> A transfer is included from Amsterdam's Schipol Airport or Central Station to ms <em>Inspire</em> for the start of your riverboat cruise along the Rhine. Meet your riverboat crew for a welcome briefing, then kick off your fun family river cruise by joining your shipmates for a welcome reception and dinner aboard the riverboat this evening.

Amsterdam, the remarkable capital of The Netherlands, is all about water; like Venice in Italy, it's dominated by a series of canals that link its many tiny islands. Known to the Dutch as grachten, the city&rsquo;s 17th-century canals fan out in crescent-shaped rings from the northern waterfront. Start your day with a visit to the Van Gogh Museum, displaying the world&rsquo;s largest collection of works by Dutch Impressionist painter Vincent van Gogh. After, enjoy an orientation tour of Amsterdam, followed by a unique view of the city on a canal boat cruise through these historic waterways, hopping on and off to explore the city&rsquo;s heart, which feels more like a village than the compact center of a cosmopolitan city, with your local guide. Aboard the canal boat, you&rsquo;ll glide beneath curved bridges carrying walkers and cyclists &ndash; as well as trams and cars &ndash; and past the narrow former homes of merchants who stored their goods on the upper floors. Along the way, see a host of 17th- and 18th-century structures, the 19th-century Centraal Station, the city flower market and more. This afternoon, rejoin the riverboat in Utrecht and enjoy lunch onboard as she sets off along the Rhine, bound for K&ouml;ln (Cologne), Germany.

Germany&rsquo;s fourth-largest city, historic K&ouml;ln (also known as Cologne) was founded by the Romans in the 1st century AD; nearly destroyed by Allied bombing during World War II, modern K&ouml;ln&rsquo;s unique mix of rebuilt, restored and new structures sprawls across both sides of the Rhine. After a full morning of cruising, arrive in K&ouml;ln and begin your exploration with a guided walking tour of the city, dominated by the immense, twin-spired K&ouml;lner Dom (Cologne Cathedral), whose construction only took six hundred years! Completed in 1880, this Gothic &ldquo;Dom&rdquo; was declared a UNESCO World Heritage Site in 1995. This evening, head to Burg Satzvey, a moated castle in Germany's Rhineland region dating back to the 12th-century, for a grand dinner in the castle's banquet hall that transports your family back to the Middle Ages for some medieval fun! Later, return to the ship and continue your cruise to Koblenz.

Awaken this morning in Koblenz, a beautiful city set at Deutsches Eck &ndash; the &ldquo;German Corner&rdquo; &ndash; where the Rhine and Moselle rivers meet. The city&rsquo;s roots go way back to the Middle Ages, when its prime location made it a powerful controller of trade along these important waterways. Today you can choose to join your local guide on a walking tour of Koblenz&rsquo;s Altstadt (Old Town), a delightful mix of medieval town squares, tucked-away corners, medieval churches, baroque residences and wine taverns. Or set off on a bicycling tour* through fields, forests and vineyards along the Rhine-Moselle (Rheinradweg) bicycle route. Bicycling is a countrywide passion in Germany, and the route&rsquo;s easy riverside trails take you through woods, meadows and Riesling winelands, offering views of passing pleasure boats and freighters on the river. Rejoin the riverboat for lunch and continue cruising past many castles overlooking the river, including Marksburg Castle. During the afternoon and evening's cruise, learn about the colorful history and traditions of "Carnival"; it grew out of celebrations leading up to the Christian observance of Lent, and has been an important part of the cultural scene in Germany (and in K&ouml;ln in particular) for centuries. Have fun preparing costumes for and participating in an onboard &ldquo;Carnival Night&rdquo; celebration after dinner.

Day 5: Heidelberg & castles on the Rhine

As a major transport link across the heart of central Europe for centuries, the mighty Rhine River was a source of great riches for those who controlled the trade that plied its waters... and today, the cities, towns and castles along its banks remind us of that wealth and the power it created. Arrive late morning in Mannheim before traveling to Heidelberg, Germany&rsquo;s oldest university town, where the narrow lanes of the Altstadt are lined with shops and caf&eacute;s set within well-preserved 17th-century buildings for a funicular ride up a hillside to visit the romantic ruins of Heidelberg Castle. Perched high above the city, your family will be awed by the castle&rsquo;s imposing ensemble of buildings from different centuries and architectural periods, radiating out from a central courtyard. Within its walls, you can feel the sweep of hundreds of years of history that was made here &ndash; and enjoy the sweeping views from its terrace and gardens. Back aboard the riverboat, a discovery briefing precedes dinner.

Day 6: French for a day in Strasbourg

Today your riverboat calls on the historic city of Strasbourg, France, surrounded by the hills of southern Alsace. Renowned for its fairy-tale charm &ndash; and as the &ldquo;Crossroads of Europe&rdquo; for its role as home to the European Union &ndash; Strasbourg is the cultural capital of the French region of Alsace. Have some Franco-styled fun as your family becomes &ldquo;French for a Day&rdquo; in Strasbourg during a morning filled with learning French phrases, a sing-along featuring French songs, and a chocolate tasting! You can return to the riverboat for lunch, or stay in Strasbourg and spend the afternoon exploring as you please. Among the treasures you&rsquo;ll see here are the medieval canals, watchtowers and half-timbered houses of La Petite France, a UNESCO World Heritage Site; stately city residences; the modern buildings of the European Parliament&rsquo; and the 11th-century Gothic Cath&eacute;drale Notre-Dame de Strasbourg. Dinner tonight will be back aboard your riverboat. Tonight, you'll set sail for Basel.

Day 7: Alpine fun by rail to Mt. Pilatus & in Lucerne

Depart your riverboat this morning for an excursion to Switzerland's Lake Lucerne area and Mt. Pilatus &ndash; where mountain peaks, forests and meadows straight out of a picture book await your family. Travel to Alpnachstad at the edge of shimmering Lake Lucerne, where you&rsquo;ll board the world&rsquo;s steepest cogwheel train for your ascent to the summit of Mt. Pilatus. Climbing to the very top (Oberhaupt), nearly 7,000 feet high, is most definitely part of the fun, as you travel upward at a really steep 48&deg; angle, while drinking in the views of Alpine meadows and mountain streams. Mt. Pilatus, by the way, was so named because (a) ancient Roman governor Pontius Pilate was rumored to have been buried there, or (b) it resembles the belly of a large man (perhaps Pilate) lying on his back&nbsp; &ndash; depending on which local legend you believe! Head back down the mountain at your leisure to lovely Lucerne for some time to explore on your own; sights in this &ldquo;city of lights&rdquo; include Altstadt (the Old City), whose narrow cobblestone lanes lead to centuries-old buildings painted with frescoes; the Kappelbr&uuml;cke (Chapel Bridge), a covered wooden footbridge dating back to the 1330s, with an octagonal water tower that was once used as a prison; picturesque squares like the Kornmarkt, Weinmarkt and Hirschenplatz; and the iconic Lion Monument, honoring the Swiss mercenaries who lost their lives during the French Revolution. This afternoon, join us in Lucerne for fun with fondue and a Swiss folklore show, prior to catching up with the riverboat in the historic city of Basel. Lying at the center of the &ldquo;Three Corners,&rdquo; where France, Germany and Switzerland meet at the Rhine, Basel's city skyline is dominated by the 14th-century M&uuml;nster Cathedral. Join us for a farewell reception followed by dinner, as your riverboat overnights in Basel.

<strong>Tour ends: Basel.</strong> Disembark your riverboat this morning by 9:00 AM. A transfer is included from the riverboat to Euroairport Basel-Mulhouse-Freiburg or Basel SBB Bahnhof. Fly home anytime. Allow 3 hours for flight check-in. For guests wishing to spend more time in Basel, ask at booking about extending your stay with an additional hotel night at Tauck&rsquo;s hotel.

Compare tour This tour has been added to the comparison list. Cick here to view.
View live deal View live deal Book between now and the 31st December for travel in 2020 & receive an additional hotel night free pre or post tour! 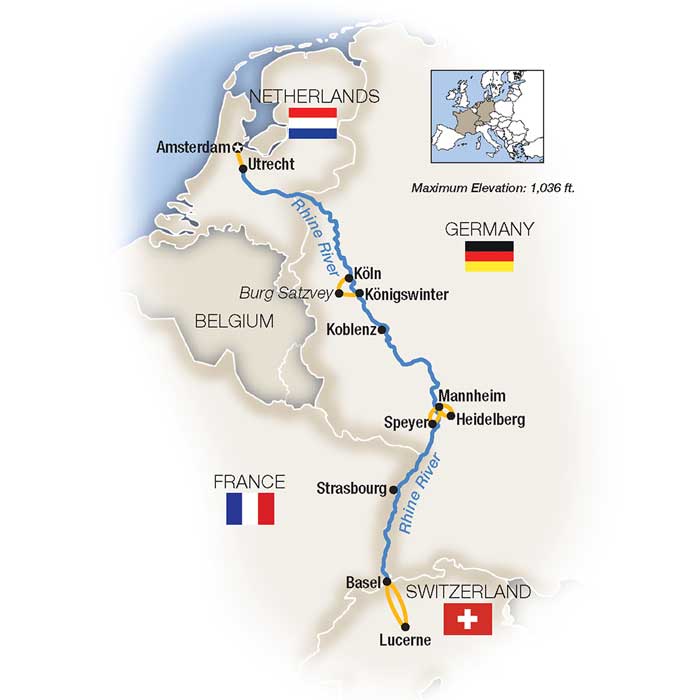